The Lesson of Tu B'Shvat 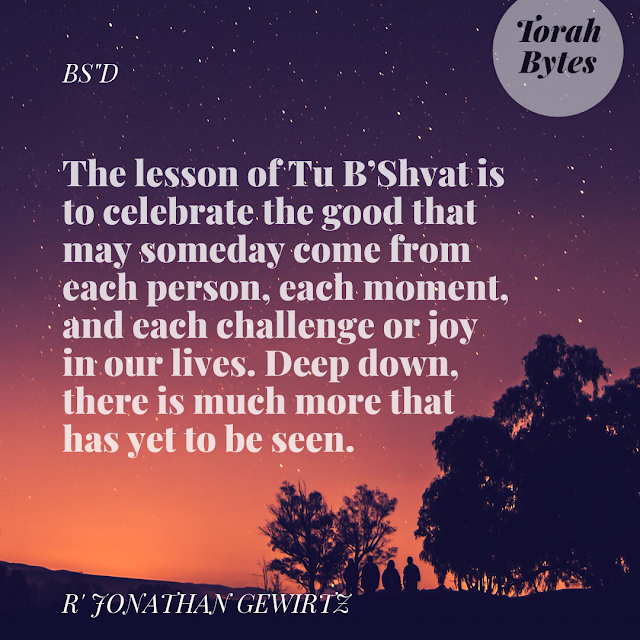 On Tu B’Shvat, we eat fruit. Some people have a special Tu B’Shvat seder but it’s based on kabbala and not an established Halacha. We don’t say Tachanun, but we don’t say Hallel either. What exactly is it that we celebrate on this Rosh HaShana of the Trees?
Parshas Beshalach nearly always falls out the week before Tu B’Shvat. In that parsha, we find that the women played musical instruments when they sang shira, the praise of HaShem for taking us through the Reed Sea. Did you ever wonder where they got instruments from?

The answer is that they brought them with them from Egypt. When HaShem announced that He was taking the Jews out of Egypt, the women prepared for the eventual praise they would sing. They packed along tambourines and cymbals to do it right. In fact, it was in the merit of this faith in HaShem that we were redeemed.

The Gemara in Megilla (10b) says: The ministering angels wanted to sing Shira (at Krias Yam Sif) but The Holy One Blessed Be He told them, “My handiwork is drowning in the sea and you want to sing to Me?!”

The Shel”a HaKadosh explains: The Jewish women prepared their instruments right away because they were sure of HaShem’s salvation. The Angels should have praised HaShem immediately upon hearing His decree because they know His word is as good as a deed. Therefore, HaShem challenged them, “You wait until you see the Egyptians drowning before you want to praise Me? You should know better than that! Follow the example of the pious women who believed in Me before I effected the miracle.”

In other words, the merit of the women was the ability to see and celebrate the potential

On Tu B’Shvat, it is the mid-point of the winter, the time when sap begins to rise in the tree to nurture it as it moves towards blossoming in the Spring. What we are celebrating is that potential, with the knowledge that though we can’t see it yet, there will be a reason to sing glorious praise to HaShem in the future.

“Any fool can count the seeds in an apple, but only a wise man can count the many apples in a single seed.” The lesson of Tu B’Shvat is to celebrate the good that may someday come from each person, each moment, and each challenge or joy in our lives. Deep down, there is much more that has yet to be seen.
Rabbi Jonathan Gerwitz Tu B'Shvat