The Purpose of a Mitzvah (Bo) 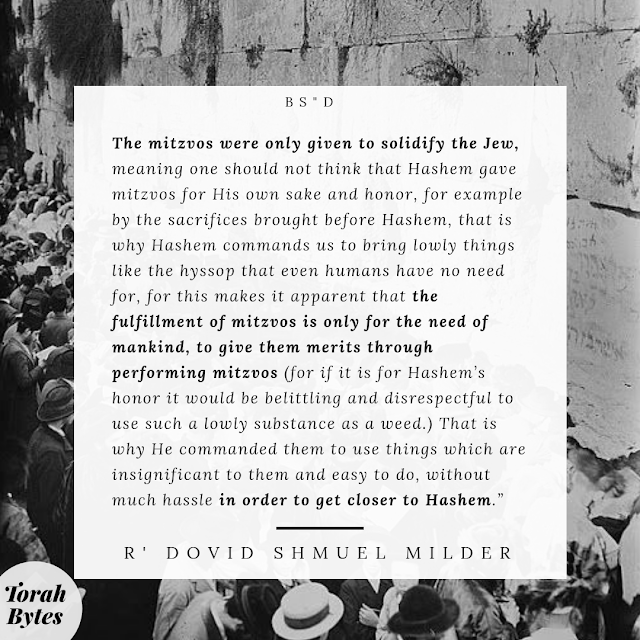 Superficiality Can Create a Utopia

The Medrish Rabba teaches us a very powerful and fundamental lesson from the hyssop. The Medrish first begins as follows: “And you shall take a bunch of hyssop” This is what the pasuk, “’As an apple tree among the trees of the forest’ (Shir HaShirim 2:3) is referring to. Why is Hashem compared to an apple? (Some say the word tapuach, though literally means apple, refers to an esrog sometimes, see Yefeh Toar and the second Tosfos in Taanis daf 29b). Just as the apple seems to be something of no great substance to the naked eye but has a taste and a smell, so too Hashem, ‘His palate is sweet, and he is altogether desirable’ (Shir HaShirim 5:16). He appeared to the non-Jews and they did not want to accept the Torah, as the Torah appeared to them as something of no great substance. In reality it has taste and smell. How do we know it has taste? As it is written, ‘Comprehend (literally: taste) and see that the Lord is good’ (Tehillim 34:9). It has food as it is written, ‘My fruit is better than gold’ (Mishlei 8:19). It also has smell as it is written, ‘And the fragrance of your garments is like the fragrance of Lebanon’ (Shir Hashirim 4:11). The Jews said, ‘We know the power of Torah therefore we won’t budge from Hashem and His Torah, as it says ‘in His shade I delighted and sat, and His fruit was sweet to my palate’ (Shir HaShirim 2:3).’” (Click here for Hebrew text.)

At this point the Yefeh Toar explains that taste refers to the reward one receives in this world for observing the Torah, while the principle remains intact for him in the World to Come, which refers to the smell which is spiritual reward. Also “the fragrance of your garments” refers to divrei Torah, words of Torah, as it says in Tractate Shabbos that ‘your words of Torah should cover you as a garment covers a person’

The medrish continues: “So to there are things that appear lowly but Hashem commands us to perform many mitzvos with them. A hyssop seems worthless to a person, but it has great powers before Hashem for it is compared to a cedar in many places, when it comes to cleansing the metzora (spiritual leprosy), burning the red heifer, and in Egypt He commanded to perform a mitzvah with the hyssop, as it says ‘And you shall take a bunch of hyssop’. So to by King Shlomo it writes: “He speaks to the trees from the cedar in Lebanon to the hyssop coming out of the wall. You should learn from this that the big and small are all equal before Hashem. Through small things He performs miracles and through the hyssop which is the lowliest of trees (it is just a weed) He redeemed the Jews. That is ‘As an apple tree among the trees of the forest.’”

The Yefeh Toar teaches us a couple of inspirational lessons from the last part of the Medrish. “Just as the main reasoning of the Torah is hidden from the eyes but those who follow its ways will find its reason so to there are things that appear lowly but they have much treasure and great reason like the hyssop, which seems like nothing at all (just a weed) but it has great power in terms of mitzvos… The intent here is that the reward for doing mitzvos is based on the fulfillment of the mitzvos that Hashem commanded. Not because of the ingredients that carry the mitzvah based on their quantity or quality, therefore even if the ingredients are very small in quantity and quality it is still considered very great. The mitzvos were only given to solidify the Jew, meaning one should not think that Hashem gave mitzvos for His own sake and honor, for example by the sacrifices brought before Hashem, that is why Hashem commands us to bring lowly things like the hyssop that even humans have no need for, for this makes it apparent that the fulfillment of mitzvos is only for the need of mankind, to give them merits through performing mitzvos (for if it is for Hashem’s honor it would be belittling and disrespectful to use such a lowly substance as a weed.) That is why He commanded them to use things which are insignificant to them and easy to do, without much hassle in order to get closer to Hashem.”

Why didn’t the Non-Jewish nations accept the Torah when they had the chance? The medrish is telling us that they had a superficial view of Hashem and His Torah. It wasn’t appealing from the outside. There was no glitz and glamour, no attraction; so they rejected Hashem and His Torah. However the Jews understood the power of Torah because their forefathers, starting with Avraham, took a deep look, of their own freewill, beyond the surface, and realized there must be something more to the world and the universe. They realized there must be a G-D who created and takes care of everything and if He runs the world He must have various ways for us people to do things in order to take care of ourselves and the upkeep of the world, Hashem’s will, the way Hashem, the way The Creator of everything planned for the world to be run. Avraham was able to simply look around at the world and figure out what Hashem wanted or expected him to do, but it was Avraham’s descendants who decided to cling to Hashem and follow His word, which Hashem gave to them as a gift on Har Sinai to make it easier to figure out how to live a meaningful, wholesome life in this world and reap the benefits in the Eternal World to Come; this gift being the Torah.

So all the non-Jew had to do was to look beyond the superficial level and dig deeper to find the gems, the good taste and sweet smells. Some of them, to their credit, do, and they convert to Judaism in order to live the a life filled with Torah and mitzvos.

This superficiality is the connection to the next part of the medrish. A world renowned principle of modern thought is that equality means just that - a utopia, where everything, and everyone, must be equal. Differences should not exist anymore, whether it is race, gender, or creed.  Everything has equal rights which mean they should not be viewed as anything different, and everything should be the same, a melting pot.

However this medrish is teaching us that Hashem, the Perfect One, Almighty, All Knowing, has a different understanding of equality. Hashem acknowledges that things are different and there are different classes of substances and even people. Some are better quality some are lesser quality; some are bigger and stronger, others are smaller and weaker, and there are different levels. However everyone and everything has its own role or purpose in this world and it makes no difference if they are bigger or smaller, lowly or important, whatever status they are, they all have a purpose in serving Hashem and bringing a person towards his or her perfection. For example, kohanim have a special elevated status more than yisraelim, and Jewish law demands they be given more respect, and only they will serve in the Beis HaMikdash, with leviem playing a more minor role in the service).  Yet, kohanim are not able to keep, for the most part, some precious mitzvos that yisraelim can do, like burying the dead, which is referred to as a chesded shel emes, a true act of kindness. So too, what seems to be as insignificant as a weed can be so important before Hashem that it is used as one of the catalysts for the Jewish redemption from Egypt, as well as purification of contact with the dead or tzaraas.

On a superficial level one would think everything must be the same; nothing should be treated differently, and that is why the Non-Jews did not accept Hashem and His Torah. But if they would have just dug deeper, not taken it at a glance, they would have seen the beauty and wealth of Hashem’s Torah, and that everyone and everything has meaning and use in this world. Every individual thing or person is special and viewed as an individual with an important purpose and can be used in the grand scheme of things, for mankind to become closer to Hashem, and bask in His Holy Presence. With this Divine view of things they could realize what is true equality and Who is the “Apple tree among the trees of the forest.”

This is an English translation of the letter signed and dated by HaRav Moshe Sternbuch, shlita, Ra'avad of Yerushalayim, on March 26, 2020 attached below. Be”H Rosh Chodesh Nissan 5780 Due to our many sins a plague has spread amongst the Jewish nation in all their places of residence, and the whole world is on fire and raging. Sorrow and sighs are rampant in many Jewish homes. It is the time of divine wrath, and the gemoro (Menochos 41a) explains that when divine wrath is prevalent in the world, Hashem punishes even for positive commandments, which He usually does not do. Therefore, during these times we must be exceedingly careful about our actions to make sure that they do not contain any flaws with regard to positive commandments, and all the more so with regard to negative commandments. In addition, we are obligated during these times to conduct an account of actions, and to improve whatever needs to be improved. Let us search our ways and examine them and return to Hashem, there…

Teshuva for Speaking Loshon Hora If one spoke loshon hora and wishes to do teshuva, the halacha is as follows:

If no damage was caused to the subject, for example, the listeners did not accept the defamation, the speaker must still repent for his averah ben adam laMakom (between man and G-d) - transgressing the prohibition of speaking loshon hora, which is assur even if no harm was effected. This includes the 3 components of teshuva:Charatah (regret)Vidui (confession) (to Hashem only)Kabbalah (a sincere acceptance for the future to avoid transgressing again)If the listeners did accept the speaker's words, thus causing damage or suffering to the subject, then, in addition to the violation of Hashem's commandment and the accompanying teshuvah, he MUST also ask forgiveness from the subject for the hurt he has caused him, as with any averah bein adam lachavero (between man and his fellow). Even if the subject does not know about the loshon hora and the damage caused to him, the sp…

Derive No Benefit from Xmas Lights

Rav Avigdor Miller on Admiring the X-mas Lights Q:Is there anything wrong with admiring the colorful lights that the our non-Jewish neighbors hang up during their holiday season?

A: It's very wrong to admire anything that is in any way connected to avodah zarah. Of course it's wrong! תזרם כמו דוה - "You should throw it away like something that is unclean" (Yeshai'ah 30:22). It's disgusting. And even if you don't think so, you must tell yourself that it's disgusting. You must train yourself to think properly. The lights are disgusting. Chas ve'shalom to admire the lights.