The Role of Jewish Mothers 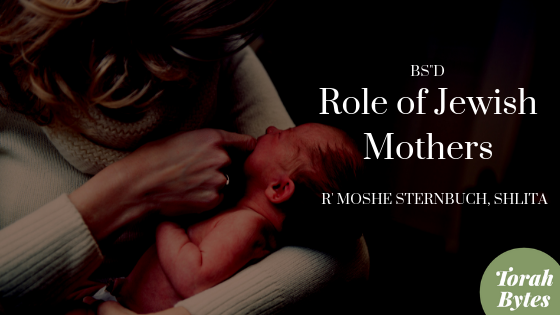 based on the droshos or R' Moshe Sternbuch, shlita

And Moshe said, "With our youth and with our elders we will go, with our sons and with our daughters, with our flocks and with our cattle we will go, for it is a festival of Hashem. And he [Paroh] said to them… not so, let the men go now and worship Hashem, for that is what you request." (Shemos 10:10-11)

Why did Paroh not agree to send the women, and what did he intend to gain by keeping them? The Radvaz explains that Paroh knew that if the Jewish nation would leave and offer sacrifices to Hashem they would abandon the Egyptian way of life and its abominations and return to their original faith in Hashem. Hence, Paroh agreed to send the men only if the women would remain behind in Egypt, because they would then remain steeped in tumah, and influence their husbands to do the same.

He concluded by bewailing the state of European Jewry in his time where Jewish education for girls was still extremely deficient, and noted that the mother is the whole foundation of the Jewish home, and when she is influenced by foreign, heretical and impure sources, that has a detrimental effect on the entire home, and could even lead to its destruction.

Rav Sternbuch notes that in the decades since then the situation has thankfully improved dramatically with the proliferation of Beis Yaakov schools everywhere, but there are still girls studying in institutions where irreligious teachers impart views far removed from Torah values, as well as girls working in irreligious environments. These situations must be avoided so that the sanctity of the Jewish mother and her home will not be affected.
Bo Jewish Mothers Rabbi Moshe Sternbuch