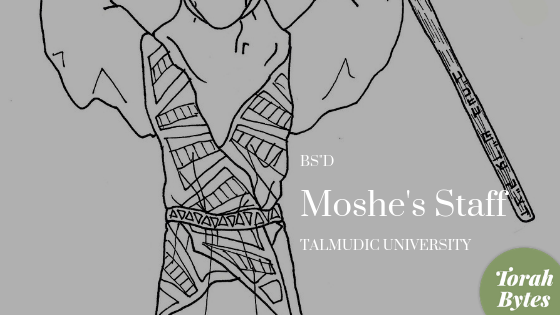 In last week's parsha, Hashem shows Moshe what he can do with his staff - when he turns it into a snake and then back - as a proof to others that Hashem spoke to Moshe. We also find that some of the ten makos were performed with this staff. So what makes this staff special?

This was no ordinary staff. Adam gave this staff to Chanoch, who gave it to Metushelach; he in turn passed it on to Noach. Noach bequeathed it to his son Shem, who transmitted it to Avraham. From Avraham to Yitzchak, and then to Yaakov, who took it with him to Egypt. Yaakov gave it to Yosef; upon Yosef's death all his possessions were removed to Pharaoh's palace. Yisro, one of Pharaoh's advisors, wanted it so he stole it and stuck it in the ground in his garden in Midian. From then on no one could pull out the staff until Moshe came. He read the Hebrew letters on the staff, and pulled it out (Pirke D'Rebbe Eliezer 40).

Where did Adam get it? It was one of the ten things Hashem created at twilight of the first Shabbos (Pirkei Avos 5:6), which he then gave to Adam.

Why was no one else able to lift it? Well, the Midrash (Shemos Rabbah 8:3) says that it was the weight of 40 se'ah, which the Me'em Lo'ez (Torah Anthology Shemos1 chapter 4) explains to be equivalent to 672 pounds!

Similar to the Luchos, the Me'em Lo'ez says the staff was made out of sapphire.
Also, since we know that Moshe was 10 amos (around 20 feet) tall from the Gemara (Berachos 54a), his staff must have been pretty big as well.

The staff was engraved with the forty-two letter name of Hashem, the names of our patriarchs, our matriarchs, Yaakov's sons, and the abbreviation of the ten plagues: Detzach Adash Be'achav (Shemos Rabbah 8:3).

The Zohar adds that the forty-two letter name was in a variety of different colors (Zohar Soncino edition, Bereishis, section one, page 9a).
Moshe's Staff Talmudic University Vaera