The World Needs You (Vaera) 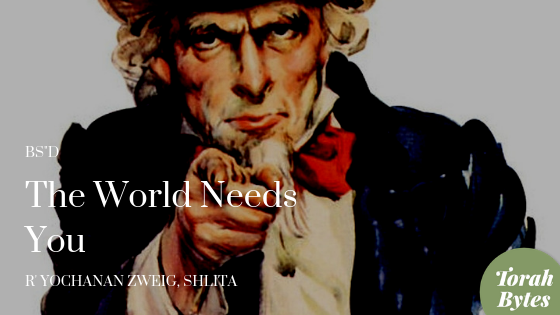 It's All About Me


These are the heads of their fathers' houses; The sons of Reuven the firstborn of Yisroel; Hanoch, and Pallu, Hezron, and Carmi; these are the families of Reuven... (Shemos 6:14)


Rashi (ad loc) is bothered by why the Torah suddenly finds it necessary to record the genealogy of Yaakov's family right in the middle of the story of the Exodus. Rashi goes on to explain that the Torah wanted to record the yichus (lineage) of Moshe and Aharon; and once it mentioned Moshe and Aharon, it begins from the firstborn of the family - Reuven.

This is unusual for a few reasons. Generally, when the Torah records the lineage of an individual, the Torah begins with the individual and works its way backwards (e.g. Pinchas, the son of Eleazar, the son of Aharon the Kohen). So why did the Torah begin with Yaakov? Moreover, why does the Torah mention the families of Reuven and Shimon at all?

Sometimes, when attending someone's simcha, during the speeches the attendees are subjected to a detailed recollection and description of all the prominent antecedents in the family. While it is true that a family's yichus does add, at least somewhat, to that individual and family's prominence - as the possuk says, "the glory of children are their fathers" (Mishlei 17:6) - most people tend to forget the beginning of that very same possuk: "the crown of grandfathers are their grandchildren."

In other words, the crowning achievement of one's family isn't in the past, it's in the future. We have to develop ourselves into people who our forbearers would be proud of and become their crowning achievement. That means that all they did in their lives, their sacrifices, their own accomplishments, etc. all become for naught if we fail to fulfill our own mission in life. The Midrash (Bereishis Rabbah - Toldos) says that the only reason Avraham was saved from the fiery furnace was because he would have a grandson named Yaakov. In essence, we can and must justify the lives of our ancestors.

This is an awesome responsibility to fulfill. While all of us are descended from a glorious past - that of Avraham, Yitzchak, and Yaakov - our personal obligation is to fulfill their mission. If we, G-d forbid, fail to live up to that responsibility then all is for naught. As great as our forefathers (and all our forbearers throughout history) were,  they need us in order for the world to come to its final culmination and fulfill the destiny of why all of us were created.

That is what the Torah is telling us here. Moshe was supposed to lead Bnei Yisroel out of Egypt and into Eretz Yisroel to the final purpose of why the world was created. Therefore, this is the story of Yaakov's family. That is why the lineage begins with him. Continuing with his first born Reuven and then Shimon, great as they were, they didn't succeed in fulfilling the family's mission. But Levi, through Moshe and Aharon, justified the entire family and their purpose in fulfilling Avraham's vision of bringing Hashem down to this world, and on to the final redemption.
Rabbi Yochanan Zweig Vaera Yichus