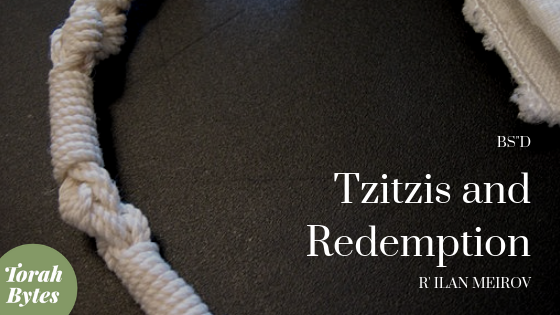 AS HEARD FROM… Rabbi Ilan Meirov
(via CHAZAQ & TorahAnytime.com)
(Facebuker Rebbe's Shabbos Table Talk)
The Tzitzis, the fringes worn on the corners of a garment, must only be affixed to a four-cornered garment. If it has three corners or five corners, there is no mitzvah; it is meaningless to attach the strings (though there may be an additional prohibition of bal tosif, ‘adding’ to mitzvos.)

Rashi in Parshat Shlach says the garment must have four corners to correlate with the four phrases of redemption in our Parsha: I will take you out, I will rescue you, I will redeem you, and I will take you as my nation. The fourth phrase refers to receiving the Torah.

Most people are on board with the first three, being saved from slavery. The fourth one they are a little less sure about. “You know, the Torah is so hard to follow, there are so many laws…” and so on. They don’t want freedom OF religion, but freedom FROM religion. This is wrong.
This week was New Year’s Eve when hundreds of thousands of people stood for hours in Times Square to be there at the precise moment of midnight to watch a lighted ball drop. Though it was raining, not a single umbrella was to be seen, as the police had prohibited them. No food, no drinks, no chairs. And these people were thrilled to be part of it. Nobody suggested a rain date of January 2nd (Dovid z”l’s birthday by the way.) We can take a great lesson from this.

Hashem gave us the Torah. Its pleasure, experience, and benefit is so beyond compare to the Ball Drop that they shouldn’t be mentioned in the same breath but we will do so in order to learn something. When something is important to you, when it’s meaningful and you know you want to be a part of it, you understand that it must be pure and unadulterated. You don’t water down the New Year’s Eve celebration by having it another night or making a party that ends at 8pm. You go all in with every tradition, rule, and you exhibit great self-sacrifice for what is important to you.

This is the lesson of the Tzitzis. If you want them to mean anything, you need the four corners which represent what G-d had planned for us in taking us out of Egypt. If you do anything different, well… you’ve dropped the ball.
Geulah Rabbi Dov Winiarz Rabbi Ilan Meirov Redemption Tzitzis