When Silence is Powerful 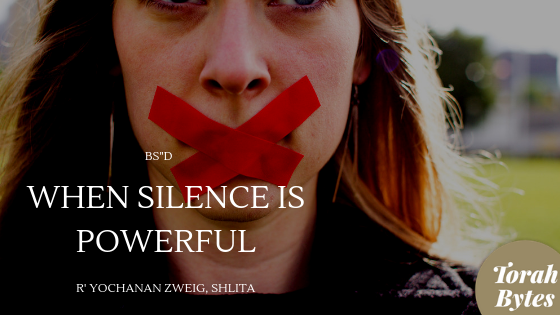 
The Talmud (Gittin 56b) uses this verse in a very novel way to describe the might of Hashem. The Talmud records the despicable acts that the wicked Titus engaged in while razing the second Beis Hamikdosh. After defiling the Holy of Holies in an unspeakable manner, Titus went and ran his sword through the paroches (the intricately woven tapestry that divided the "Holy" from the "Holy of Holies"). Hashem created a miracle and blood started pouring out from this "wound," causing Titus to foolishly believe that he killed Hashem. He then tore the paroches down and used it to wrap the vessels of the Beis Hamikdosh so that they could be carried off to Rome to display his victory.


Regarding this incident, the school of R' Yishmael taught, "Who is like You among the powerful, Hashem! This can be read as:'Who is like you among the mute'" (the word "eilim - powerful" is written without the letter yud so it can be read "ilaim - mute"). In other words, Hashem made himself like a mute; He didn't react or respond to Titus' outrageous behavior. Thus, Hashem exhibited remarkable self-control, which is the ultimate demonstration of power.
Similarly, we find the well known Talmudic teaching (Shabbos 88b) regarding those who endure in silence: "Those that suffer insult yet don't respond with an insult; those that are shamed yet do not reply in response...upon them the Torah states, 'for those that love Him shall be like the sun going out in it's full might' (Shofetim 5:31)."

This analogy alludes to the Gemara (Chullin 60b) which recounts the creation of the sun and the moon: Originally they were created equal in size, as the verse says, "Hashem created the great luminaries" (Bereishis 1:16) - implying that they were proportionate. The moon complained to Hashem that "it isn't possible to have two kings sharing one crown." To which Hashem replied, "in that case, make yourself smaller."

Throughout the whole conversation, the sun makes no comment - a remarkable display of restraint. Thus, those who suffer in silence are compared to the might of the sun.
But upon closer examination we see that the Gemara in Shabbos is quite different than the Gemara in Gittin. The Gemara in Shabbos indicates that those who have been insulted or shamed have a response or a sharp reply ready to be delivered, but restrain themselves. But the Gemara in Shabbos calls Hashem "mute." A mute is someone who has nothing to say because he is unable to speak. Where is the great display of self-control in that situation?

The Gemara in Gittin recounts the miracle of when Titus stabbed the paroches and blood came pouring out. What could possibly be the reason that Hashem made this miracle? What is the point?
The only thing that requires more self-control than not responding to an insult is allowing someone to believe that you have been totally defeated. Hashem's incredible restraint in the face of Titus' terrible behavior was in letting Titus believe that Hashem had been assassinated and that Titus had won. In doing so, Hashem acted as if he were impotent instead of omnipotent. This is why Hashem was called a mute, for Hashem had acted as if He was unable to respond. That was the greatest display of Hashem's might.
Beshalach Rabbi Yochanan Zweig