Why do we need the Ten Makos? 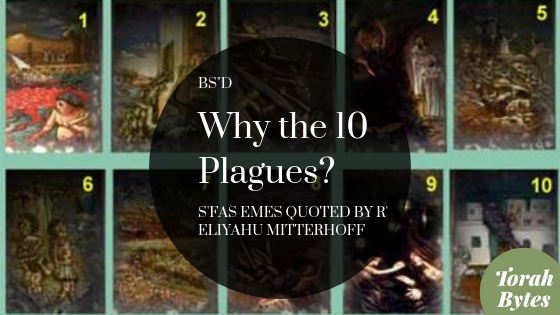 The Sefas Emes says like this. It’s this week’s Parshas Bo, why do we have to have the 10 plagues in Mitzrayim? This is simply unbelievable. It’s a similar idea. It’s an offshoot of this idea. The 10 plagues were against, kenegged, to remove the 10 maamaros, the 10 statements Hashem created the world with. These 10 statements are what made nature. The 10 makkos, came here to remove nature. Because what happened? Like the Ramban said, since it is nature and since there are the planets and stars and everything that’s happening, we forget about God. We forget that there’s a higher power. Therefore, God brought the 10 plagues in order to remove the 10 maamaros. And why did He do that? That we should get to the level of the 10 commandments. So, you have the 10 plagues against the 10 statements of nature, to lead us to the higher level of the 10 commandments which is above nature, which is the Jewish people following the will of God. It’s a similar idea. The plagues were there to remind us that there’s something above nature.