11 Adar, the Yahrzeit of the Chidah 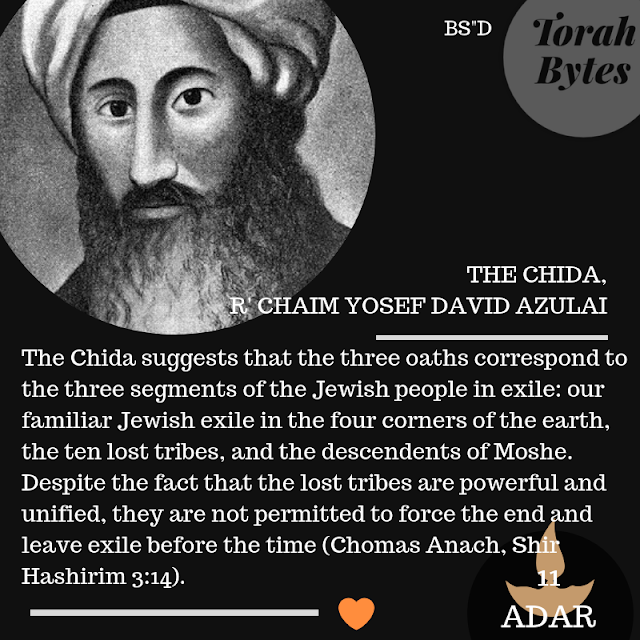 Popularly known as the CHIDAH, the abbreviation of Chaim Yosef David Azulai.

The Chida was one of the most fascinating and multi-faceted figures in Jewish history. Born in Jerusalem he became a scholar of the first rank and wrote classic works in halacha such as Shaar Yosef, Birkei Yosef and Machzik Beracha. He studied under Rabbi Chaim Ben Atar (Ohr HaChaim), becoming his closest and most devoted follower. However, those sublime days were cut short when, after less than a year, the Ohr Hachaim passed away. After finishing all he could learn in the revealed part of Torah he turned to learning its mystical secrets of Kabbalah with R' Shalom Sharabi.

In 1753, at the age of 29, he traveled to Europe as an emissary of the communities of Eretz Yisrael and again in 1772 on behalf of Chevron. Each trip lasted in excess of 5 years. He served as the rabbi of Cairo (Egypt) for five years. He completed his second trip in Livorno (Italy), where he remained for the rest of his life.

Wherever he visited Chida made sure to inspect the important libraries and thus became familiar with many thousands of manuscripts. Out of these visits grew his remarkably compact and informative classic bibliographic and biographic work, Shem HaGedolim, with biographies of 1,300 scholars and a description of 2,200 books. In all he wrote about one hundred volumes in every field of scholarship.

Over and above his learning Chida was a radiant, impressive, yet remarkably modest personality. This shines through in the detailed diary of his trips, Maagal Tov. He attributes all the honor he received to the fact that he represented the Holy Land. And, does not take insults lightly, as they may reflect on the honor of Eretz Yisrael.

It is of interest to note that the Noam Elimelech, R' Elimelech of Lizhensk remarked that God always keeps things equal. At the time that Mendelssohn came and wrote his heretical explanations on the Chumash, God sent the Chidah to counteract, with his holy books, strengthening our basic beliefs in God.

He was interested and absorbed by all that he saw and heard in the many places that he traveled and was curious to learn about the new and exotic. He was careful not to insult anyone and to avoid controversy. He studied musar regularly and was always working to improve his character. He complained of those who only study Talmud and poskim and do not sufficiently appreciate the study of Tanach , Mishnah and musar. Chida learned of his wife's passing while in Tunis and was forced to conceal her death for fear that the community would force him to remarry. Mourning in solitude he wrote that his wife Rachel was "perhaps unique in the generation...in wisdom, honor, powerful and awesome intellect, grace, beauty, great modesty and extraordinary cleanliness."

The gravesite of the Chidah is in Har HaMenuchot, Jerusalem.

In the Beit El yeshiva of the mekubalim sat the holy mekubal Rabbi Shalom Sharabi better known as the Rashash. Drinking his words of Torah were the future giants of Kabbalah: Rabbi Yom Tov Algazi, the Chidah, and others. Once they had learned their fill of the Torah as we see it, they listened as their rav delved into the depths of the secrets of Kabbalah. These exalted men formed a pact together, working on themselves and taking on certain takonot (spiritual regulations). One of the most prestigious members of these holy group was the Chidah. One day word spread that the Chidah had taken upon himself to separate from the group and go out into the great world outside Eretz Yisrael to collect funds for the poor and needy of Chevron. The reason too soon became known. Rabbi Shalom Sharabi felt that the time was now a favorable one in heaven to pray and try to hasten the final redemption. Under his instructions all the members of his holy group cut themselves off from all worldly matters, afflicting themselves in various ways after which they sanctified their bodies with a fast of 3 days without a break. However, the time was not yet ripe and after the three-day fast was over they heard a heavenly voice calling out to them, "My dear sons, my time for the redemption is not yet ripe. You have no right to hasten it by force. Besides one of you will have to suffer the trials of going out into galut (exile)." Since there was no mention of who would be the one, they drew lots, the Chidah being the one picked out.

*** For books in English about the Chidah at JudaicaPlus.com > The Chida: His Life and Times , The Diaries of Rabbi Haim Yosef David Azulai

May the merit of the tzaddik Rabbi Chaim Yosef David Azulai protect us all, Amen.