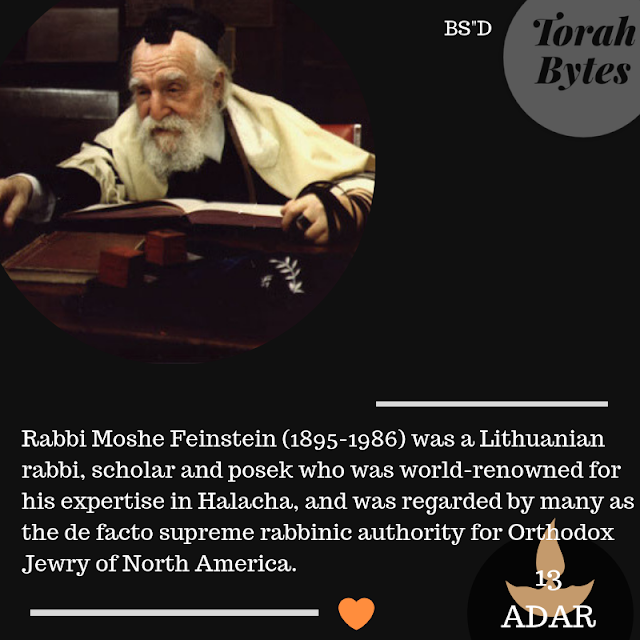 Rabbi Moshe Feinstein (1895-1986) was a Lithuanian rabbi, scholar and posek who was world-renowned for his expertise in Halacha, and was regarded by many as the de facto supreme rabbinic authority for Orthodox Jewry of North America.

Rabbi Moshe Feinstein was born in Uzda, near Minsk, Belarus, then part of the Russian empire. His father Rabbi David Feinstein, was the Chief Rabbi of Uzdan. His father was a descendant of Rabbi Yom Tov Lipman, Rabbi of Kapolye, who authored many works and whose glosses on the Talmud have been published in the back of the Talmud. In his youth Rabbi Feinstein studied with his father and also in the yeshivas located in Slutsk, Shklov and Amstislav, before being appointed rabbi of Luban where he served for sixteen years. Under increasing pressure from the Soviet regime, he moved with his family to New York City in 1936 where he lived for the rest of his life.

Settling on the Lower East Side, he became the Rosh Yeshiva of Mesivta Tiferes Jerusalem. He later established a branch of the yeshiva in Staten Island, New York. He was president of the Union of Orthodox Rabbis of the United States and Canada and chaired the Moetzes Gedolei HaTorah of Agudath Israel of America from the 1960s until his death. Rabbi Feinstein also took an active leadership role in Israel's Chinuch Atzmai.

Rabbi Moshe Feinstein's greatest renown stemmed from a lifetime of responding to halachic queries posed by Jews in America and worldwide. He wrote about two thousand responsa on a huge range of issues that affect Jewish religious life and practice. The bulk of these were published in his classical "Igros Moshe". Rabbi Feinstein was universally recognized as the preeminent Torah sage and Posek of his generation, and people from around the world called upon him to answer their most complicated Halachic questions. He was revered by many of the generation's greatest sages including Rabbi Yaakov Yisrael Kanievsky, Rabbi Yonasan Steif, Rabbi Elyah Lopian, Rabbi Aharon Kotler, Rabbi Yaakov Kamenetsky and Rabbi Yosef Shalom Elyashiv, even though several of them were far older than he.

Rabbi Moshe Feinstein passed away on the 23 March 1986 corresponding to the 13th of Adar II, 5746 in the Hebrew calendar. At the time he was regarded as Orthodoxy's foremost rabbinic scholar and Posek. His funeral in Israel was said to be the largest among Jews in millennium, with an estimated attendance of 300,000 people. He was eulogized both in Israel and America by the foremost Rabbis. All of them tearfully expressed grief over what they termed a massive loss to the generation.

Rabbi Moshe Feinstein was buried on Har HaMenuchos in proximity to his Rebbe, Rabbi Isser Zalman Meltzer; his colleague, Rabbi Aharon Kotler; his son-in-law Rabbi Moshe Shisgal; and next to the Belzer Rebbe Rabbi Aharon Rokeach.

Rabbi Moshe Feinstein had tremendous concern for families in Israel and the Rabbi Meir Baal Haneis Salant charity fund. Rabbi Feinstein is a signatory on the historic 1979 Kol Koreh (broadside) on behalf of Rabbi Meir Baal Haneis Salant, together with such Torah giants such as Rabbi Yaakov Kamenetsky, Rabbi Yaakov Yisroel Kanievsky The "Steipler", Rabbi Shloma Zalman Auerbach, Rabbi Elazar Simcha Wasserman, Rabbi Dovid Povarsky, Rabbi Yechiel Michel Feinstein, Rabbi Moshe Shmuel Shapiro, Rabbi Shmuel Birnbaum, and many, many others. May their memory be a blessing to all.