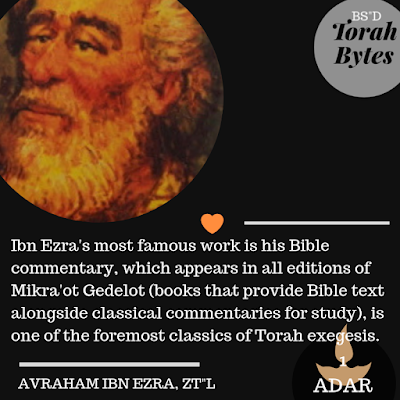 Ibn Ezra spent his youth in Cordova, Spain, where he received his Torah education. He established a close friendship with Rabbi Yehudah Halevi, the famous poet and philosopher. In 1135 Ibn Ezra was forced to flee to Rome. There he composed his Bible commentary. Later he traveled to Provence, London, back to Provence, and to many other places. Some say that he journeyed to Eretz Yisrael and that he died there.

Believing in astrology, he attempted to reconcile the belief in cosmic decrees with the concept of free will.

He wrote various books on mathematics and astrology, on the calendar, and on the astrolabe; eight treatises on astrology were completed at Lucca in 1148.

Ibn Ezra's most famous work is his Bible commentary, which appears in all editions of Mikra'ot Gedelot (books that provide Bible text alongside classical commentaries for study), is one of the foremost classics of Torah exegesis. In his commentary Ibn Ezra follows the peshat, the interpretation according to the plain meaning, in preference to the aggadic, homiletic, allegoric approach. Many of the comments deal with problems of grammar and syntax. They are written in a style that is extremely terse and often interspersed with obscure allusions.

A great number of commentaries have been written on Ibn Ezra's work, each attempting to shed light on the many obscure phrases. He fought valiantly for the purity of the Hebrew language and did not hesitate to criticize harshly any infraction of the rules of grammar or style he encountered. His caustic wit is apparent in many sarcastic comments with which he demolishes interpretations he considers incorrect. His commentary is studied by all serious students of Tanach (Bible).

May the merit of the tzaddik Rabbi Avraham ibn Ezra protect us all, Amen.