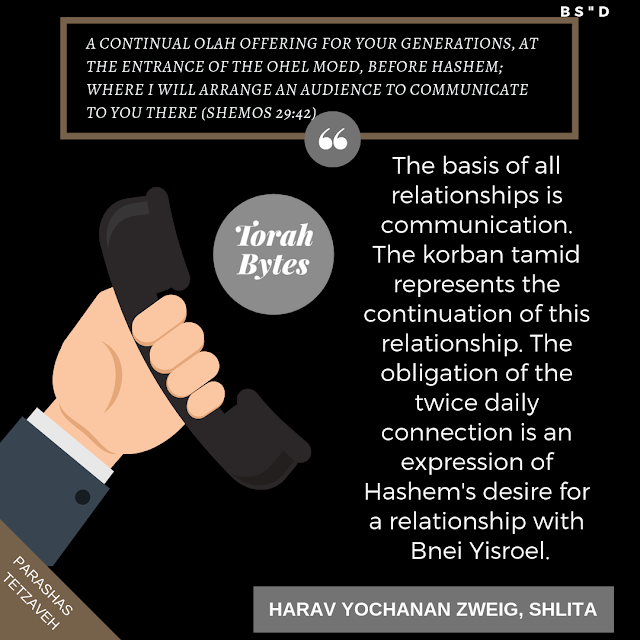 A continual olah offering for your generations, at the entrance of the Ohel Moed, before Hashem; where I will arrange an audience to communicate to you there (29:42)

There is a well known Midrash describing a Tannaic dispute pertaining to what constitutes a "klal gadol baTorah - great rule in the Torah." This is brought down by the compiler and author of the Ain Yaakov in the introduction. While Ben Zoma identifies "Shema Yisroel" as the paradigmatic "klal gadol baTorah," Ben Nanas cites "v'ahavta l'reacha," and Shimon ben Pazi quotes "es hakevesh echad ta'aseh baboker."


Obviously, one can make a clear argument for the inclusion of both "v'ahavta l'reacha" (love your neighbor as yourself) and "Shema Yisroel" as essential, if not key, elements of the Torah. But the third verse is referring to the korban tamid; what is so significant about that particular obligation that it is termed a "Klal Gadol Batorah"?

The Torah in describing the korban tamid calls it "the olah offering that was performed at Mount Sinai" (Bamidbar 28:6). Rashi (9 ad loc) explains that the daily offering is connected to the one brought at Har Sinai. Ramban writes that the presence of the Shechina that was at Har Sinai went into the Mishkan. Essentially the Mishkan was a continuation of the relationship between Hashem and Bnei Yisroel. The basis of all relationships is communication. The korban tamidrepresents the continuation of this relationship. The obligation of the twice daily connection is an expression of Hashem's desire for a relationship with Bnei Yisroel.

This is also represented by the Luchos, which are considered the marriage contract for our relationship with Hashem. That is why the korban tamid that we bring every day is connected to the revelation at Mount Sinai. This is also why the 17th of Tammuz is the day that the Luchos were broken and later, the korban tamid ceased to be; they both represented a cessation of the communication between Hashem and Bnei Yisroel.

This is the connection between the Aron and copper Mizbeach, and there is a dispute as to where Hashem actually communicated from. They are both very appropriate places to be a source of communication because they represent the same thing, Hashem's desire to have a relationship with us. Lastly, this of course, is the reason that the korban tamid is a key element of the Torah. Hashem wants to have a relationship with us, that makes us (and all of creation) very significant. This explains why our daily communication with Hashem, our daily prayers, are based on the korban tamid (Rashi)). On Shabbos, we must focus on making our homes a miniature model of the Beis Hamikdosh and incorporate the presence of the Shechina within our family.
Communication Korban Tamid Rabbi Yochanan Zweig Relationship Tetzaveh