Enticements of the Yetzer Hara: 14. Distracting with Good Deeds 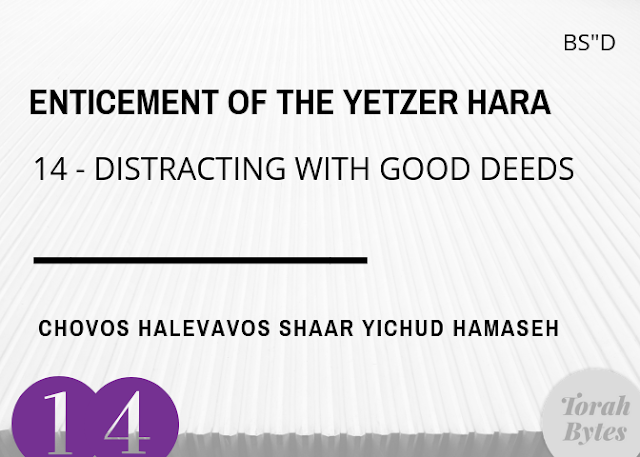 
If a man will escape from all that we mentioned previously, and belongs to the men of wisdom and understanding (becomes a talmid chacham), the yetzer will bring to his attention a difficult matter of wisdom, and he will distract him with questions and answers, with difficulties and solutions, and he will show him which matters he missed and which he should have investigated more. He will also show him how much he still has to learn in this wisdom so that he makes a personal accounting and resolves to learn it. This way, the yetzer will distract him in all his acts of service of G-d, and will cause him much more damage than gain.

(Marpe Lenefesh: Even though he will think, during the time of prayer, on doing mitzvot and good deeds or to answer (Talmudic) difficulties, which are good things, nevertheless, the loss, namely that he ruined his prayer with outside thoughts is a greater sin in his hand and outweighs all of what he gained, and our sages said (Shabbat 10a): "Torah and Tefilah each have their own time"...as in the Shulchan Aruch: "prayer is in place of the temple korbanos, therefore one must be careful that it is like a korban with kavana, to not mix it with other thoughts just like improper thoughts can invalidate a korban", see there)


(Due to all of these distractions) it is possible that he will do the service of G-d but be outside of it, and that his thoughts are always distracted in some other secular interest. It may even be that he will seek forgiveness from G-d with his tongue, all the while eagerly rushing in his mind and spirit to rebel against Him (i.e. greatly desiring something prohibited - PL).


On this one of the pious said: "this kind of seeking forgiveness requires seeking forgiveness". And he pleas to G-d with his limbs, but turns from Him in his heart and thoughts, similar to the verse: "These people come near to Me with their mouth and honor Me with their lips, but their hearts are far from Me. Their worship of Me is nothing but acts of rote" (Yeshaya 29:13), and "But then they would flatter Him with their mouths, lying to Him with their tongues; Their heart was not sincere with Him" (Tehilim 78:36).

(Pas Lechem: "(1) seek forgiveness....(2) And he pleas to G-d" - it appears from the movement of his limbs that he is truly pleading but his heart and thoughts turn from Him. In both ways, his external contradicts his internal. From the first way, where he was seeking forgiveness for the past while [internally] preparing himself to sin in the future. From the second way, where he pleas and seeks some matter, but one who pleas must cleave his thoughts to the One he is pleading to and to find favor with Him... and promises to be faithful.. but here his heart is not with G-d.)

Because, if I went to borrow something from someone, and I asked him for the thing with my lips but my heart was against him, if he noticed this, he would be disgusted and repulsed by me. All the more so, that he would not grant me my request. And certainly, even more so, if he knew that I were planning in my thoughts not only things which would not find favor with him but rather even things which would make him angry with me. Surely, his hatred for me would be greater and his refusal more appropriate. And certainly, I would act in this same way towards someone who asked me to borrow something and if I knew his thoughts, just like the Creator knows what is in my heart.

Therefore, how then while [standing] before my Creator could I not feel ashamed? How can I expect to please Him with my conduct when I would not want a weak, created being like myself to conduct himself thus towards me, and which a fellow weak, created, and dependent creature like myself would likewise not be pleased to find in me, as it is written "Were they ashamed when they had committed abomination? nay, they were not at all ashamed, neither could they blush:[therefore shall they fall among them that fall: in the time of their punishment they shall be cast down, says the L-ord]" (Yirmiyahu 8:12), then the yetzer will be smitten.

(Marpe Lenefesh: In the Orchos Chaim of the R"Osh siman 47 "have intent in your prayer. For prayer is the service of the heart. If your son spoke to you not from his heart, would it not anger you? What will you do, putrid drop, before the King of the Universe, the Holy One, blessed be He. Are you not like a slave charged with an important job, for his own benefit, who then corrupts it? How then can you stand before the King of kings, the Holy One, blessed be He... if you cannot do this for the entire prayer, at least do not lack this for the first blessing of the Amida and for the Shema because one who did not have intent in these did not fulfill his obligation."


In the Shl"A (Mesechet Tamid p.ner mitzva): "Let one reflect in his mind, if he were to speak before a flesh and blood king and between his words, he would speak other nonrelated things, certainly, he would be liable for his head to the king. And behold, for the King of kings, the Holy One, blessed be He, thoughts are just like words, "for the L-ord searches all hearts, and understands all the plans of the thoughts" (Divrei Hayamim 28:9). Therefore, what is the difference if one interrupts with other thoughts or other words during the prayer?"


Translator: Rabbi Beniyahu Shmueli, a famous Rosh Yeshiva and Kabalist in Jerusalem, wrote on Parsha Vaetchanan: How should our prayers appear? Rabbi Avraham Cohen of Tunis wrote in his book "Millel L'Avraham" about a holy rabbi who heard about a circus which came to the city, and that in the circus show there is an amazing acrobat who walks on a tightrope stretched out between two mountains and over a river. The Rabbi said: "I am going to watch". The pious people wondered "what does the Rabbi want with the circus?" Afterwards, the Rabbi answered: "I watched the face of the acrobat, and I saw how he focuses all of his thoughts in this walking. Because he knows that the danger of falling is imminent every second and were he to turn his thoughts to something else, immediately, he would fall to the depths and be no more. At that time, I learned mussar that when a Jew prays, he is under duty to focus all of his thoughts with total kavana for the prayer. If not, he will fall.")