Enticements of the Yetzer Hara #15: Conceal Your Religious Deeds Completely 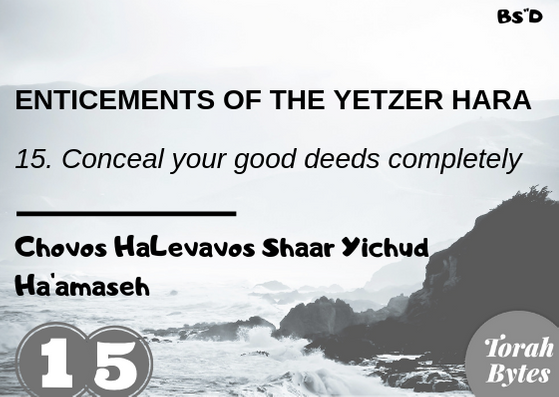 When the yetzer gives up trying to entice you in this way, he will try to entice you from the angle of distancing from flattery, and he will say to you: "you cannot possibly serve G-d with a perfect heart until you distance yourself completely from flattery whether it is a little or a lot. And to distance yourself from flattery towards other people requires completely hiding all of your deeds from them, and showing them the opposite of what is in your heart.

(Pas Lechem: Since if you merely conceal them, perhaps they will ponder you and realize that you conceal your deeds. Then they will investigate and examine to know them. Therefore, you must be smart and show others the opposite of what is in your heart. Thus, they will think you are one of the simple people and will not ponder you at all. Then, you will be successful in concealing your deeds and will not become known.)

Therefore, when you pray, be brief, and let there be no appearance of desire or striving in them. When you learn wisdom, do so in seclusion so that none but the Creator knows. Let no good trait in you become apparent. Show others laziness and heaviness in the service of G-d so that your name will not go out and you will lose your reward. Do not instruct others to do good nor rebuke them against evil. Do not show your wisdom nor teach others, and let there be no sign of fear of Heaven on you, and no sign of being a servant of G-d so that others will not honor you on account of this. In order that your zeal in hiding your deeds to people is complete, mix with and befriend all the different classes of people. Adopt their customs and walk in their ways regarding laughter and laxness in words of truth.

(Tov Halevanon: i.e. let everything be equal in your eyes, and do not differentiate on them, lest they consider you pious, and give you a reputation for being an ascetic and a pious man, whereby you will lose your reward.)

Do not guard so much from lies and oaths. Join them in their feasts and drinking parties, in their riddles, in their excessive indulgences and abundant laughter. Speak of people, and speak of their faults. To summarize, avoid all things that will bring you a reputation for asceticism."

(Marpe Lenefesh: i.e. to abandon flattery completely. The intent is to not do any good things before people. Hence, he abandons the service of G-d because of the praises of people, so that they do not praise him for it. He is fleeing from a small fire, namely, the trait of flattery, and into a big fire, namely, he will abandon all good deeds one by one.)

If you listen to him in this, slowly without noticing, you will wind up losing even your faith. But if you answer him: "you have already helped my enemies by waging war with me, by your cunning planning to destroy my strength and promote my downfall. How could I flee from a small fire towards a big fire? I have tried to flee from love of recognition and honor in order to not embellish myself towards people, and you are instructing me to embellish myself to them by leaving the service of G-d!"

(i.e. two evils, to embellish myself to them in leaving the service of G-d - TL, with the excessive things, laughter, and the other things mentioned - PL)

Pas Lechem: "slowly without noticing, you will wind up losing even your faith" - This is the way he snares people with his traps. After confusing you in the good, he will topple you into the light bad, and from the light bad to the heavy bad, and from the deeds to the faith, until he eventually brings you to kefira (denial of G-d). And since he comes slowly in stages, and especially since the initial enticement appeared good in your eyes, therefore you did not even notice your downfall.

"you have already helped my enemies..." - since in this enticement, the yetzer disguises and enclothes himself as if he is a loving friend, as if he is the good inclination, and that he is coming to help a man against the evil inclination. Therefore, a man should tell him: I recognize that you have not come to help me, but rather to help my enemy, the yetzer hara. You, like him, are waging war against me.)


"Rather, the religious deeds which it is proper for me to conceal are those which can be done (wholly - PL) from beginning to end without knowledge of people. But to pray with the congregation, to instruct others to do good, to rebuke others from evil, the study of wisdom, doing acts of kindliness, or the like - it is not right to neglect and abandon them due to concern for flattery (i.e. out of concern that I will appear to be a servant of G-d so that people will praise me - TL). It is my duty to do them with intent to G-d. If people praise me or honor me for this, my reward will not be diminished in the least because while doing them, this was not my goal."

It was already said: when you do a good deed that others know about, and you want to know if your motives (are proper), test yourself in two ways.
(1) Examine what reward you hoped to receive, and from whom you intended to receive it. If from G-d, this is good. If from anyone else, it is not good.

(Pas Lechem: Even though the sages said: "do not do a mitzva in order to receive a reward" (Avos 1:3). However, [here] his intent is for reward which is acceptable to G-d, namely, that "a mitzva leads to another mitzva...[and the reward of a mitzva is a mitzva]" (Avos 4:2), or likewise the motive "[One thing I ask of the Lord]...to behold the pleasantness of the L-ord" (Tehilim 27:4) through this deed. Understand this.)

(2) To consider, if you were alone (and no one were observing you besides G-d - TL), would you still do this deed in the way you did it? If the answer is yes, your deed is wholly devoted to G-d. Continue doing more like these. But if it would be less than this, stop doing it until (you sense - PL) your heart has become more purely devoted to G-d. Then the yetzer will be smitten. (when you tell him that you do not need to be concerned for flattery of people after testing yourself with these two things - TL)

(Marpe Lenefesh: If you were alone by yourself, would you have also done this? If yes, then you can do more deeds like this one even in front of people and it will not damage you. If no, that your heart is not yet whole so much, it is better to refrain from it, and not to do a fraudulent thing with bad motives.)