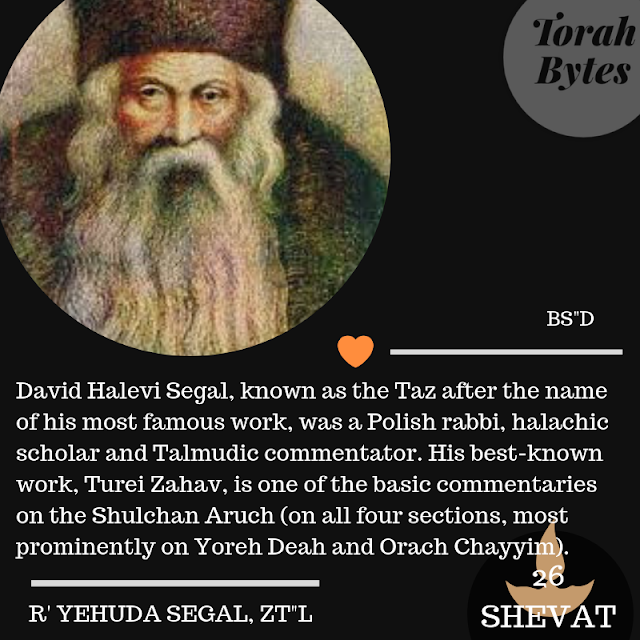 Lessons of our Sages Through the Ages from the Pages

This week’s parsha speaks a lot about judgments and people getting what’s rightfully coming to them. The 26th of Shvat (this week) is the yahrtzeit of R’ Dovid HaLevi Segal, author of the Turei Zahav (known as the Ta”Z) who was involved in a very intriguing lawsuit.

When he got engaged, his father-in-law, R’ Yoel Sirkes, author of the Bayis Chodosh, (known as the Ba”Ch,) promised him a meat meal every day. As was the custom, R’ Dovid lived in his in-laws’ home at the beginning of his marriage. The wheel of fortune turned and the Ba”Ch couldn’t afford normal meat. He started giving his son-in-law lung meat, which was cheaper.

The town was astounded when the Ta”Z took his father-in-law to a din Torah, claiming that the lung meat didn’t qualify as normal meat as per their agreement. The Bais Din ruled in favor of the Ba”Ch that he had not defaulted on his promise, but people could not imagine that the Ta”Z could be so insensitive to the financial woes of his in-laws as to take them to court.

R’ Dovid confided to someone, “Since I began getting the lung meat, I felt my Torah study suffer and I was afraid that in Heaven they would blame R’ Yoel for it. I wanted to make sure an earthly court ruled he was fulfilling his obligation, so he would not be punished in Heaven.”
Rabbi David heLevi Segal Taz Yahrzeit