The Crown of Torah (Terumah) 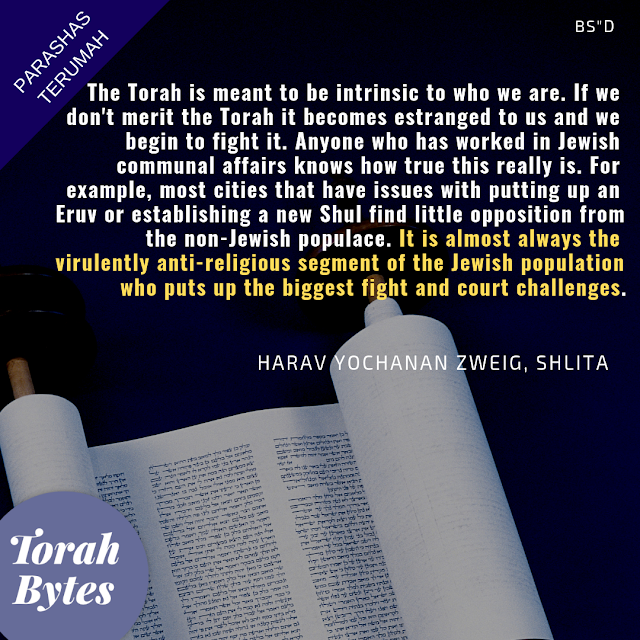 The three holy vessels mentioned above, the Aron, Shulchan, and Mizbeach, were ringed with a golden "crown." In Hebrew, this crown is referred to as a "zeir." The Gemara (Yoma72b) poses an interesting question: "Rabbi Yochanan asked, the word is read as zeir(crown) yet it is written as zar (stranger)!" In other words, the proper way to have written the word zeir is with a yud between the zayin and the reish, without a yud the word could be read as zar. So, R' Yochanan wants to know, why did the Torah choose to spell it differently than it was meant to be read?

R' Yochanan answers the question with a somewhat cryptic statement: "If one merits (to properly study) the Torah it becomes a crown (zeir) for him, but if he does not merit it then it becomes estranged (zar) to him." R' Yochanan's statement is a bit puzzling. In general, when one receives something he then has it, and if not then he just doesn't have it. For example, if someone were to get a promotion then he has it and it may even be a "crowning" achievement. But if he doesn't get a promotion then the only result should seemingly be that he wasn't promoted. Why does R' Yochanan say that if one doesn't merit the Torah then it becomes estranged to him?

We find a similar statement by marriage: The Gemara (Yevamos 63a) says, "R' Elazar said "What is meant by the verse 'I will make him a helper opposite him (Bereishis 2:18)'?" If man merits it she will be a helpmate, if not she will oppose him."

The same is true by the Torah. The Torah is meant to be intrinsic to who we are. If we don't merit the Torah it becomes estranged to us and we begin to fight it. Anyone who has worked in Jewish communal affairs knows how true this really is. For example, most cities that have issues with putting up an Eruv or establishing a new Shul find little opposition from the non-Jewish populace. It is almost always the virulently anti-religious segment of the Jewish population who puts up the biggest fight and court challenges.

The reason for this is exactly what the Gemara is teaching us; the Torah is meant to be an intrinsic part of us and it isn't possible to have a non-relationship with it. You either have an amazing and fulfilling life with it or you, G-d forbid, have a terrible and antagonistic relationship to Torah without it. This by its very definition means you will fight it every opportunity you have. Hashem wants each and every one of us to be crowned by the Torah; as the Gemara in Yoma (ibid) says - the crown of the Torah is there waiting for anybody who wants to pick it up and make it their own.
Crown Rabbi Yochanan Zweig Terumah Torah