The Menorah of Heaven and the Salvation of Klal Yisrael (Tetzaveh) 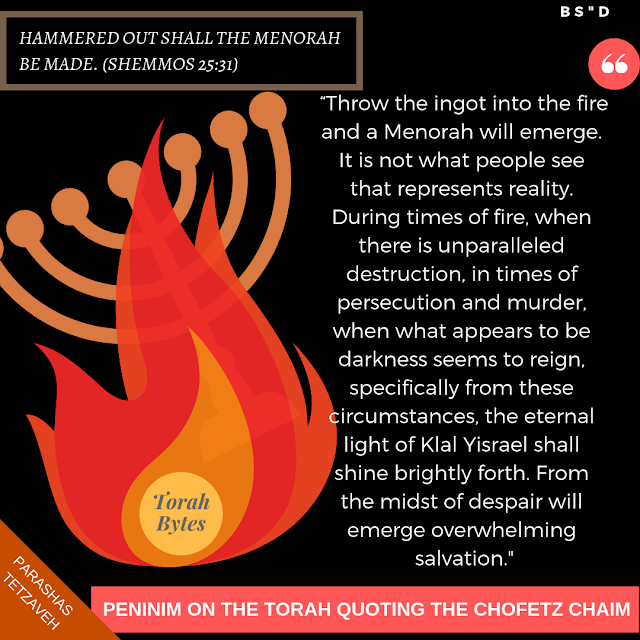 Hammered out shall the Menorah be made. (Shemos 25:31)
Peninim on the Torah

Horav Aharon, zl, son of the Chafetz Chaim, zl, related a thought concerning the future redemption which will occur in the merit of the Torah that he heard from his saintly father. We are well aware that Moshe Rabbeinu had no problem creating the vessels of the Mishkan as prescribed by Hashem until he came to the Menorah. He simply could not visualize or make the Menorah. In the end, it was necessary for Moshe to throw the ingot into the fire and Hashem (so to speak) made the Menorah. Why was the Menorah different from all the rest? What made it stand out as so difficult that Moshe, our quintessential leader and master of prophecy, just could not seem to grasp its production?

The Chafetz Chaim quotes the commentators (Malbim and others) who explain that each of the Keilim, Mishkan’s vessels, alluded to elevated spiritual concepts, which were symbolized by the Keilim. For example, the Aron HaKodesh, Holy Ark, alluded to Heavenly wisdom, which is unfathomable to man without Divine Intervention, such as the power of nevuah, prophecy. The Shulchan, Table, together with its Lechem HaPanim, Showbread, represented the physical needs of the Jewish People with the bread symbolizing material sustenance. The Mizbayach, Altar, is the go-between, bridge, link that conjoins Klal Yisrael with their Heavenly Father. The Menorah is the eternal light, symbolizing the eternal nature of the Jewish People.

The Zohar HaKadosh writes that Hashem instructed the Heavenly Angels to make a Heavenly Menorah corresponding with the Menorah in the Mishkan/ Bais HaMikdash. When the Kohen lit the Menorah in the Mishkan, the Heavenly Menorah would likewise light up. It was this light that illuminated the lives of Klal Yisrael. Thus, says the Chafetz Chaim, when Hashem instructed Moshe to make the Menorah which would symbolize the light of Am Yisrael, the eternal light of our nation, Moshe stopped and gazed into the future. He saw the millions of Jews persecuted, slaughtered and annihilated in various countries throughout the world, and he wondered: There will be so much darkness in the lives of our nation, so much pain and suffering, that our People will despair of the Final Redemption. Moshe had extreme difficulty making a Menorah that would serve as a point of illumination when, in fact, we would be subject to such extreme darkness. How do you present light when there is such incredible darkness?

Hashem replied, “Throw the ingot into the fire and a Menorah will emerge. It is not what people see that represents reality. During times of fire, when there is unparalleled destruction, in times of persecution and murder, when what appears to be darkness seems to reign, specifically from these circumstances, the eternal light of Klal Yisrael shall shine brightly forth. From the midst of despair will emerge overwhelming salvation."

The Chafetz Chaim concluded that our function during the ambiguous times of Ikvesa d’Moshicha, closing days when the heel of Moshiach is being felt, is to shine the light of Torah study on this world, so that we may hope for the Heavenly Illuminator to concur and shine down upon us.
Chofetz Chaim Geulah Menorah Mishkan Moshe Rabbeinu Moshiach Peninim on the Torah Tetzaveh Torah Zohar