The Shechinah in Our Home, (Terumah) 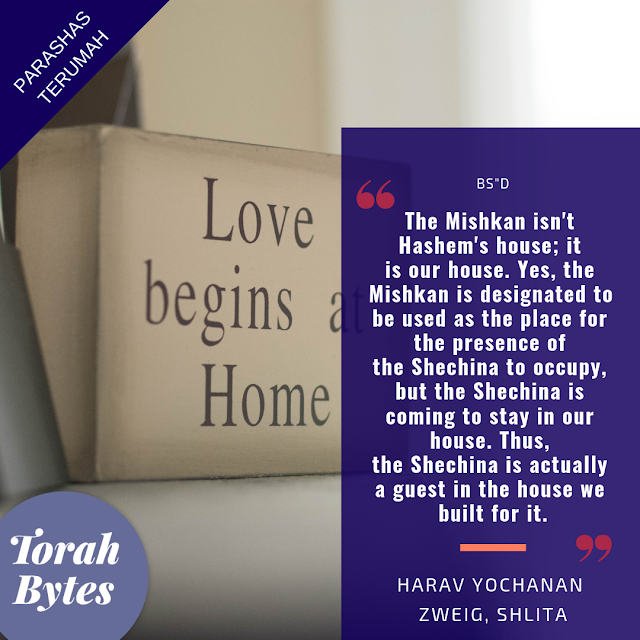 Speak to Bnei Yisroel and they shall take for Me a portion from every man whose heart will motivate him... (Shemos 25:2)

The first Rashi (ad loc) in this week's parsha makes a cryptic comment on this verse: "For Me" means dedicated to My name. Many of the commentators (e.g. Maharal in the Gur Aryeh etc.) wonder what exactly Rashi is clarifying. In other words, what in this possuk bothered Rashi to the point where he felt it necessary to say that taking something for Hashem means dedicating it to His name?

There is a fascinating Gemara (Pesachim 112a) that lists the seven directives that R' Akiva charged his son R' Yehoshua to abide by. One of those directives is to never enter one's own home suddenly. Rashbam (ad loc) quotes the Midrash (Vayikra Rabbah 21:8) that relates that R' Yochanan would make his presence known before entering his own home (presumably by knocking or making some other sound to announce his arrival and intent to enter).

The Midrash says we learn this from next week's parsha, which describes the vestments of the Kohen Gadol. One of these garments was the me'il (a robe-like article of clothing) that had seventy-two bells sewn onto its bottom hems. The Torah explains; "It shall be on Aharon to minister; its sound shall be heard when he enters the sanctuary before Hashem..." (28:35).That is to say, the bells ringing announced the Kohen Gadol's presence as he entered the sanctuary. The Midrash says that from here we see that upon entering a home one has to announce his presence. This would also explain R' Akiva's directive to his son.

However, this requires further clarification: Obviously if one is entering another person's home one cannot simply barge in, and this can readily be seen from the Kohen Gadol being required to wear ringing bells as he entered "Hashem's house" via the sanctuary. But how can Rashbam see from this Midrash that one must knock on the door when entering one's own home?

From here we see that the Mishkan isn't Hashem's house; it is our house. Yes, the Mishkan is designated to be used as the place for the presence of the Shechina to occupy, but the Shechina is coming to stay in our house. Thus, the Shechina is actually a guest in the house we built for it. This is similar to homeowners who add an "in-laws quarters" onto their property designated for the use of their family. They may be called "in-laws quarters" but ultimate ownership stays with the homeowner.

From here we now understand a fundamental principal of being a host; anyone who is an invited guest to our home is entitled to his own privacy and space. That is, in order for a guest to fully feel comfortable I must relinquish some of my space and designate it as theirs. Therefore, when entering one's own home while there are others inside you must honor their presence and their space by making your presence known before entering.

This is the same message that Rashi is teaching us at the beginning of this parsha; the gifts collected to build the Mishkan weren't to acquire a house for Hashem nor to buy a piece of property for Hashem. These gifts were for us to build a home within our community that was designated for Hashem's presence.
Rabbi Yochanan Zweig Shechina Terumah