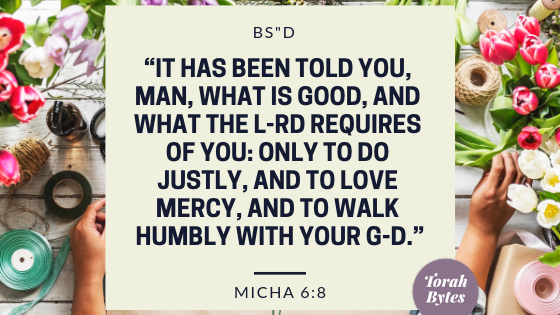 “It has been told you, man, what is good, and what the L-rd requires of you: only to do justly, and to love mercy, and to walk humbly with your G-d.”

The Gemara in Makkos 24a relates the following somewhat puzzling statement. “Rav Simlai taught: Moshe was given 613 mitzvos; David came and established 11 of those mitzvos, Yeshaya 6, and Micha 3 and Chavakuk one” (the three that are in our passuk).

What is being described here? Are David and these Neviim telling us that we only need to keep these mitzvos and neglect the rest chas v'shalom?

In the 6th of the Ran’s drashos, he explains that obviously they are not cutting away parts of the Torah. It explicitly says in Megillah 2b that no prophet has the ability to add on to the number of mitzvos in the Torah, so how much more so (kal vachomer) they lack the ability to delete any. Rather, each person was acting in tandem with the needs of his generation The Gemara in Makkos (23b) states that Hashem gave Bnei Yisrael 613 commandments to enable them to receive many merits for fulfillling His mitzvos. The Rambam in his Peirush Hamishnah at the end of Makkos explains the view that in order to gain entry to the World to Come (Olam Haba), a person must fulfill one mitzvah throughout his lifetime without any ulteria motives, such as personal gain, pride, or pleasure. The Ran interprets the Gemara Makkos that Hashem wanted to give Bnei Yisrael optimum oppurtunities to secure their place in the World to Come, thus He presented them with many commandments in the hope that they would fulfill at least one without any ulteria motives. However, unlike the Rambam's view, the Ran adds that only certain mitzvos are effective in their ability to attain a place in the World to Come. This does not infer that the other mitzvos are superfluous for they fulfill an essential role; they perfect a person and the world, and will augment that share in the World to Come..

The Ran explains that Moshe expected his generation to keep all 613 mitzvos without revealing which mitzvos gain a person direct access to the World to Come. Thus, Bnei Yisrael would fulfill all of them with equal meticulousness and would perfect each aspect of their souls.

David Hamelech, however, saw that his generation were not enthusiastic enough to fulfill all the mitzvos in the ideal way. If he were to reveal which mitzvos were most valuable, the people would at least do those ones impeccably, and be granted a ‘stairway to heaven’ through them.

Therefore, David established 11 of the most rewarding mitzvos (which he knew via a tradition from previous Neviim) to motivate his generation to be extra meticulous in fulfillling these commandments. Even within these 11 mitzvos there were those that offered greater reward than others, but David understood that he did not need to specify which of these mitzvos they were.

Later generations deteriorated further until Micha had to specify only 3 mitzvos, and finally Chavakuk to one

The Maharal in Tiferes Yisrael (perek 56) also explains the above Gemara, that each of the mitzvos listed contained the ability to reach perfection and to a certain extent included the other mitzvos. The 3 mitzvos mentioned here of acting justly, performing acts of kindness, and walking through life in a modest, humble fashion, are all principles which we have the ability and opportunity to fulfill on a daily basis. May Hashem grant us help in the performance of these as well as the rest of the mitzvos in the Torah, and in that merit, may we see the rebuilding of the Beis Hamikdash speedily in our days.