Who Has Not Made Me a Woman 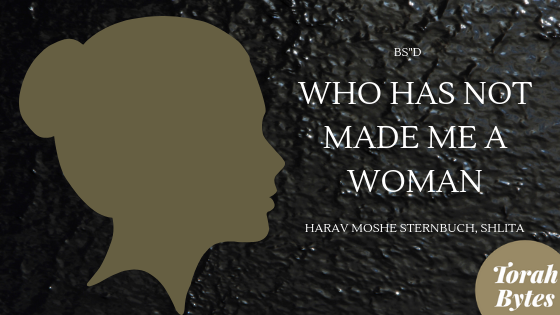 An English vicar once came across a translation of the siddur known as the Singer's Prayer Book, and noticed the blessing of "Who Has Not Made Me a Non-Jew."  He became infuriated.  "Is this how the Jews repay us for all the rights they enjoy in this country!" he ranted.  "Look how they make fun of us and degrade us in their prayers!"  He threatened to make a big fuss if the Jews woul dnot delete this blessing from their prayer book.

One Rav went to see the vicar and pointed out to him that in the next blessing in the prayer book, every Jewish male thanks Hashem that He "has not made a woman." "Do you think," th eRav told the vicar, "that we despise all our women?  Of course we don't!  We honor and respect them, but they have a different function in life.  Similarly, Jews have different task than Gentiles do. Would you like to stop eating pork or give up on a whole list of things you would not do without?  You wouldn't, but we're happy to do so.  Gentiles too have a holy task to fulfill in this life by recognizing the Creator, but we observe myriad commandments and thank G-d every day for this privilege and the closeness to Him that they create."  This argument placated the vicar.