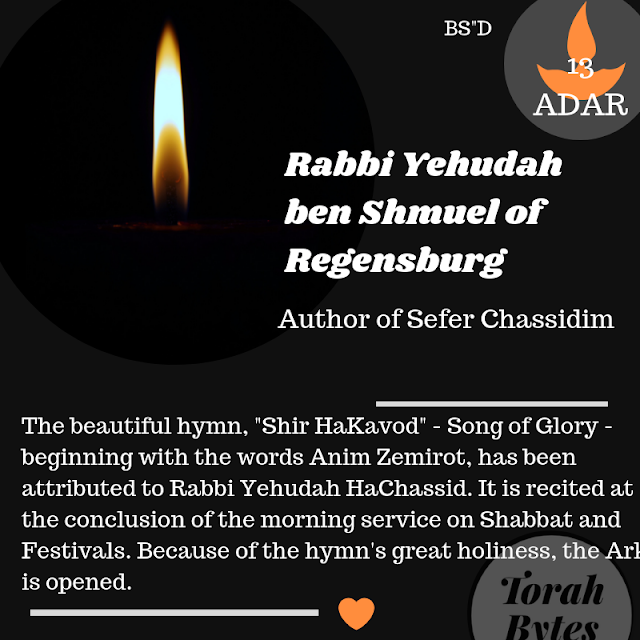 Rabbi Yehudah HaChasid's father Rabbi Shmuel, who led a famous yeshivah in Speyer, instructed him in the kabbalistic teachings. Although he possessed vast talmudic knowledge, he emphasized piety and the mystical meaning of prayer and led a life of self-denial and fasting. It was his custom to fast nearly every day, eating only at night. He was known to fast even on shabbat, for, after having fasted the entire week, the change of practice would have caused him suffering, and therefore his Shabbat enjoyment was fasting rather than eating.

He is the most prominent of the chasidei Ashkenaz, the German pietists (not to be confused with the chasidic movement founded by the Baal Shem Tov) who stressed strong and simple faith. He is also one of the Rishonim, the early Talmudic sages who expounded on the Talmud and halachah - other Rishonim include Rashi, Maimonides, and Nachmanides.

His pureness of heart and fear of God are evident in his work, Sefer Chasidim, which was highly acclaimed. It covers all aspects of Jewish life. Capturing the student's attention with parables and anecdotes taken from daily life, he imparts the most profound concepts of ethics, prayer with concentration, philosophical themes such as reward and punishment and Divine justice, and laws for day-to-day living, such as Shabbat and Festivals. The work has remained a favorite classic. Here and there we find in Sefer Chasidim instructions based on Kabbalah, rather than Halacha, that have gained acceptance, such as the custom to refrain from marrying a woman with the same name as one's mother.

The beautiful hymn, "Shir HaKavod" - Song of Glory - beginning with the words Anim Zemirot, has been attributed to Rabbi Yehudah HaChassid. It is recited at the conclusion of the morning service on Shabbat and Festivals. Because of the hymn's great holiness, the Ark is opened.

R' Yehudah's influence was very great, both in his time and in succeeding generations. Jews and Gentiles alike esteemed him as a holy man who performed miracles. Christian officials, such as the Duke of Regensburg, sought his councel.

Excerpts from his Will and Testament:

12. Don't visit the same grave twice on one day.

15. Don't weep excessively for a deceased person. There are three days for weeping, seven days for eulogizing, thirty days for mourning...beyond that God says, "Don't be more merciful than I am."

26. A person should not marry his deceased wife's sister, unless he has small children and she has pity on them.

30. Don't celebrate the weddings of two of your children on the same day.

35. You should not designate the same person as sandek (the one who holds the baby during circumcision) for more than one of your children.

45. Don't cut down a fruit-bearing tree.

It is written, "If not, say no, and I will go to the right or to the left" (Genesis 24:49). This verse teaches us that if someone is courting a girl who rejects his advances and does not wish to marry him and tells him so, he should not pursue the matter, but should immediately turn his attention to another prospective match.

If a goodhearted person married a convert who is good hearted, modest, and benevolent, then it is better to marry one of their children than to marry a Jew who does not posses these qualities, because the offspring of teh convert will be tzaddikim (righteous) and good people.

If you see two people whispering into each other's ear, control your curiosity and don't ask them what secrets they are telling each other, lest you make liars out of them. If they would have wanted you to know, they would have told you. Since obvioously they don't wish to share their confidences with you, they will tell you a lie.

May the merit of the tzaddik Rabbi Yehudah HaChasid protect us all, Amen.
13 Adar Rabbi Yehuda haChassid Yarhzeit