Enticements of the Yetzer Hara #16: Self-Worship 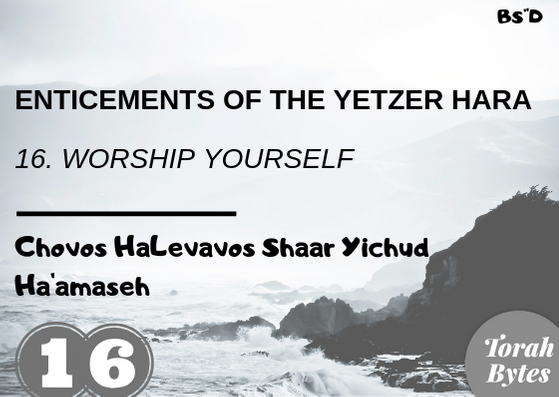 If the yetzer will not find a way to entice you in these ways, he will try to outsmart you with a subtler approach, namely, through the ways of reward and punishment in this world and the next. He will say to you: "behold, you are among the pious of the Creator, and His treasured ones. A person like you is surely worthy of reward in this world and in the next. You must exert yourself according to your abilities (in the service of G-d - TL), maybe you will earn the reward through your good deeds and your zealous pursuing of the service of G-d with a good heart and with great joy. Set the reward before your eyes, and work your hardest to reach it, because this is the greatest success and joy, as King David said: "A light is sown for the righteous, and for the upright of heart, joy" (Tehilim 97:11).

If you listen to him and you rely on his words, he will topple you by making you worship hidden association (G-d and something else - TL), namely, self-worship, in that you exert yourself in things that will bring you selfish pleasure and joy, and that will repel from you worries and despairs. If it were not for your hopes for these, you would deny the constant favors G-d bestows on you and not obligate yourself to serve Him on account of them. And furthermore, you don't see that it is befitting to serve G-d (even without these benefits) due to His greatness, infinite power, and the manifestations of His wisdom. On this the Sages said: "do not be like servants who serve their master in order to receive reward, but like servants who serve their master without [the condition of] receiving reward" (Avos 1:3).

(Marpe Lenefesh: Your worship is for yourself, so that you obtain this world and the next. And if not, you would not serve G-d with a complete heart.
"in that you exert yourself in things that will bring you selfish pleasure and joy" - you only do those things that bring you joy.


Pas Lechem: "self-worship" - You serve yourself since all of your aspirations are to benefit yourself. Behold you are both the worshipped and the worshipper. This is evident from "that you exert yourself in things that will bring you selfish pleasure and joy", "pleasure" in the hope for reward, and "joy" in being saved from punishment, and "that will repel from you worries and despairs", "worries and despairs" also corresponding to these two things.


"If it were not for your hopes for these" - you revealed your attitude that were it not for the hopes of reward, you would not be zealous and would not see yourself under duty in this. Hence, you are a denier of the beneficence of G-d. In addition to this, you revealed your understanding that you don't know the greatness of G-d, and that it is fitting to serve Him, due to His power, etc.


"due to His greatness, infinite power, and the manifestations of His wisdom" - the author included in this the three attributes (in the Amidah prayer) "Hagadol, Hagibor, Ve'Hanora" - on "Hagadol" (the Great), he wrote "due to his greatness". On "Hagibor" (the Mighty), he wrote "infinite power". On "Hanora" (the Awesome), he wrote "the manifestations of His wisdom", that when a man contemplates His wisdom (exhibited in nature), he is very amazed, and is in awe of Him, as it is written by Shlomo (Melachim 3:28) "and they held the king in awe, for they saw that the wisdom of G-d was in him".)