Enticements of the Yetzer Hara: 17 G-d's Decree vs. Free Will 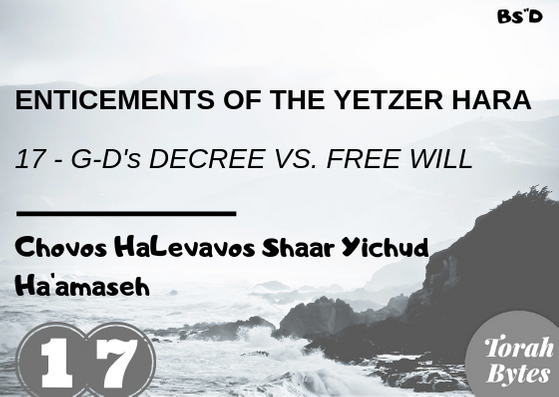 When the yetzer gives up trying to entice you in the ways mentioned, he will hurl you in a sea of doubts regarding necessity and righteousness (predestination and free will).

(Tov Halevanon: Whether all of a man's matters must necessarily follow only the decree of G-d or whether they depend on the righteousness and the deeds of human beings, as discussed at length in the gate of trust.

Pas Lechem: "necessity" - Whether a man is forced in his deeds, without any free will. According to this outlook, there is not one righteous person in the world, because the righteousness is not attributed to him.

When he sees you lax in the service [of G-d], and turning towards the path of sin, he will try to convince you of the matter of necessity with powerful arguments drawn from Scripture and Tradition, in order to give you excuses, and he will say to you:

"If the Creator wanted you to serve Him, He would force you and make you zealous in this, for only what He decrees can occur. How can you stand up against His decrees or defeat His judgments? You can only do what He decreed on you to do, because all things occur through the Creator's decrees as written 'I am G-d who does everything' (Yeshaya 44:24)."

(Tov Halevanon: If G-d wanted you to be a Tzadik (righteous person), He would have compelled you in this.

Pas Lechem: "He would force you and make you zealous in this" - for some act of service which you want to refrain from doing, he will tell you that if the Creator wanted you to do this, He would force you to do it. And on some act of service which you do lazily and sluggishly, he will tell you that G-d would have made you zealous in it...

But if he sees you engaged in secular matters and occupations, he will tell you (the opposite): "be careful of laziness (of heart - PL) and sluggishness (of limbs - PL). Don't rely on anyone but yourself, because good and evil are in your hands and success and failure in accomplishment depends on you. Therefore, exert yourself with all your strength and work with all your ability and you will succeed in obtaining your desires of this world. Guard from damaging things with all your strength and you will be saved from them, as the wise man said "Thorns and snares are in the way of the crooked; whoever guards his soul will keep far from them" (Mishlei 22:5), and "A man's folly perverts his way" (Mishlei 19:3), and "from your own hands this came" (Melachim 1:9). And so the yetzer turns around the argument, sometimes he comes with necessity and divine decree and sometimes with justice and free will according to what he deems fitting for him to entice you (to evil - PL) and weaken you (to good - PL).

But if you wake up and put to heart what our Sages said "everything is in the hands of Heaven except the fear of Heaven" (Berachos 33b), you will exert yourself in religious matters in the way of someone who understands that according to his own actions in them will be his reward and punishment, as written "He repays a man for what he has done; he brings upon him according to his ways" (Iyov 34:11). And in secular matters, you will conduct yourself with the conviction that all of your movements and the course of your matters are bound to the decree of the Creator, and you place your trust on G-d on all of them, as written "Cast your cares on the L-rd and he will sustain you" (Tehilim 55:23).

(Marpe Lenefesh: see the gate of trust chapter 4. There you will find peace of mind (an explanation) so that these two things are not contradictory.

Tov Halevanon: He spoke of this at length in the fifth chapter of Gate 3. There he demonstrated that the foundation of faith is to believe that regarding things which are related to yira shamayim (fear of G-d, i.e. moral issues), free will is in a man's hands. While for things related to worldly matters, everything is bound to the decree of G-d.. only that it is beyond the power of our minds to grasp the depths of this secret and its full explanation.