Enticements of the Yetzer Hara #18: Wait Til Tomorrow 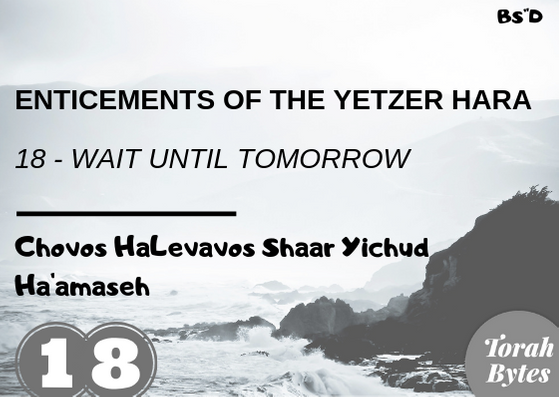 When the yetzer gives up trying to entice you in this way, he will come from a different angle. He will say to you: "that which you desire to fulfill of the service of G-d and to do it wholeheartedly for Him, you can do so after some time in the future. Even if you only have one day of life remaining, and you fulfill the service of G-d properly then before your death, you will have already earned everlasting reward and be saved from punishment. Don't you know the ways of repentance, and that the Creator will accept your repentance if you only serve Him wholeheartedly as is fitting and proper."

However, return to the correct argument, and answer him: "How can I wait until the last day of my life when I don't know when is the last day of my life? I would be similar to the story of the servant who trusted his king would never expel him all of his life, and then went off after the indulgences of this world, until the service of his master became a burden on him. Behold, suddenly he was summoned before the king to give an accounting and judgment on his work, and he did not have any answers or excuses and was sentenced to be expelled from the service of the king and from all of the king's cities. He left the king's presence poor and sorrowful in that all the time of his service to the king, he did not earn even one thing, when he could have done so. Thus he remained for the rest of his days, poor and destitute, sighing and miserable, full of sorrow and despised by all until the day of his death
Chovos Halevavos Yetzer Hara