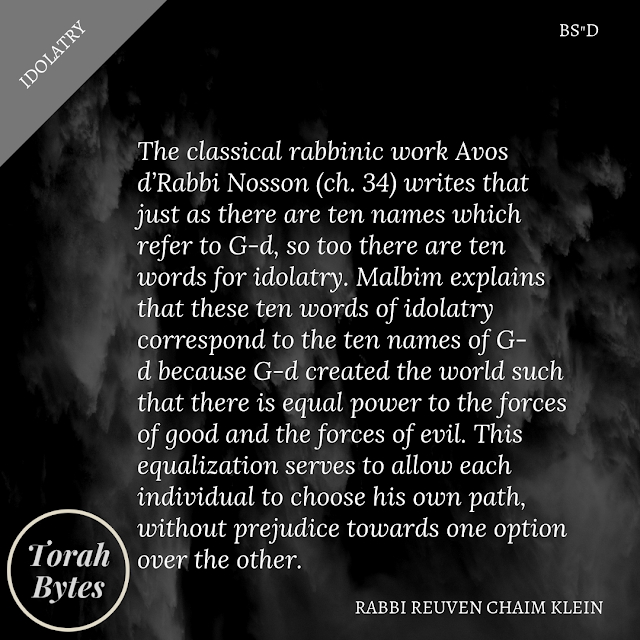 The classical rabbinic work Avos d’Rabbi Nosson (ch. 34) writes that just as there are ten names which refer to G-d, so too there are ten words for idolatry. Malbim explains that these ten words of idolatry correspond to the ten names of G-d because G-d created the world such that there is equal power to the forces of good and the forces of evil. This equalization serves to allow each individual to choose his own path, without prejudice towards one option over the other. As you might know, man’s ability to choose his own path is the basis for all reward and punishment.
Before we go on to explain these ten words, Rabbi Yom Tov Tzahalon (1559-1638), sometimes known as Maharitatz, points out the obvious: While the ten names of G-d refer to One Entity who is called by ten names, the ten words for idolatry represent ten distinct types of idol worship, and do not refer back to one unified idea. In other words, the Bible uses these ten words to disparagingly refer to idolatry, but these words are not contextually interchangeable because they may refer to different aspects of idolatry. Still, the Sages understood that conceptually all of these words allude to various negative properties of idolatry in general.

We will now visit each of these ten synonyms and explain how they relate back to idol worship or idolatrous deities. Idolatrous deities are called elilim because they are “hollow” (chalulim). Malbim explains that idolaters pretend that idols have holy spirits within them, but, in reality, they are hollow and empty. Two different versions of Rashi (to Shabbat 149a) give two different explanations as to the meaning of elilim. In the printed edition of Rashi he explains that the word elilim is related to the word chalalim (“corpses”), ostensibly because idols, like corpses, are inanimate objects that have no life. An alternate version of Rashi (cited by Rabbeinu Nissim and Ritva there) explains that elilimis related to chalulim (“hollow”) because their existence was imagined in the “empty cavity of the hearts” of those who worship them.

One type of idol is a pesel because it is considered “disqualified” (nifsal or pasul) from the range of legitimate expressions of worship.

Another type of idol is called a masecha because it is “poured” (nisuchim).Malbim (1809-1879) and Rabbi Shlomo Pappenheim of Breslau (1740-1814) explain that this refers to metal idols that were formed through molten metal poured into cast molds. Rabbi Eliyahu Benamozegh (1822-1900) writes that the word masecha is related to sichah (anointment), and refers to the ritual anointing of idols for their "consecration" (which was said to bring the spirit of the deity into the physical idol).

An additional type of idol worship is called a mazteivah (“single-stone altar”), because idols must remain “standing” (nitzavim) in their place and cannot move on their own.

Idols are also called atzavim (literally, “bones”) because they are made up of multiple parts, like the bones of a person (as opposed to G-d, Who cannot be broken down into multiple components).Malbim writes that idols are called atzavim because they “sadden” (atzuv) those who worship them, for they cannot deliver the expected results.

The Bible sometimes refers to idols as gilulim because they are “disgusting” (megualim) and are comparable to “excrement” (glalim).Rabbeinu Shimshon of Shantz and Pirush ha’Raavad (in their commentaries to the Toras Kohanim) clarify that these expressions of disgust and repulsiveness do not refer to the sin of idolatry. Rather, this term reflects the physical attributes of the idols themselves. For example, if rain falls upon idols left outside, then wooden idols become moldy, and metal ones rusty; if they are singed by fire they can also become filthy and repulsive.

Malbim explains that the disgust refers to the face of the images, which are sometimes portrayed as such disgusting creatures as insects, moles, and bats.

What is the connection between the word chamanim and animals? The Netziv, Rabbi Naftali Tzvi Yehudah Berlin (1816-1893), explains that when people die, thereby losing their ability to continue functioning, they are customarily buried in order to conceal their embarrassment. Animals, on the other hand, are not given that respect. Rather, their corpses are allowed to remain out in the open and continuously rot under the heat of the sun. Based on this, the Netziv explains that Rav Achai means that idols are most comparable to dead animals inasmuch as both are not buried when rendered useless, but are simply left out in the sun.

Finally, some idols are called asherim because they receive their "validation" (ishur) through other forces. This is because idols only receive their validation (i.e. praise) from others, but are not worthy of praise on their own merits, for they do not actually have any powers. Malbim explains this slightly differently. He writes that the “validation received through others” refers specifically to moon-worship, because even though the ancient idolaters acknowledged that the moon does not possess any light of its own, but rather receives its light from the sun, they still continued to worship the moon.

Pirush ha’Raavad writes that idols are called asherim because they receive their “straightening out” (yashar) from outside forces. In other words, if the idol falls down for some reason, it cannot pick itself up, but rather needs to be set up again by someone else.

For more information about the different types of idolatry and how the struggle against Avodah Zarahplayed out in Biblical times, check out my new book G-d versus Gods: Judaism in the Age of Idolatry(Mosaica Press, 2018). Available online and at Jewish bookstores.
· For questions, comments, or to propose ideas for a future article, please contact the author at rcklein@ohr.edu

Faulty Teachings of the Sefer HaTanya

To learn more about this, please watch this entire video.. at 8 mins into it is where R' Reisman talks about the great debate.