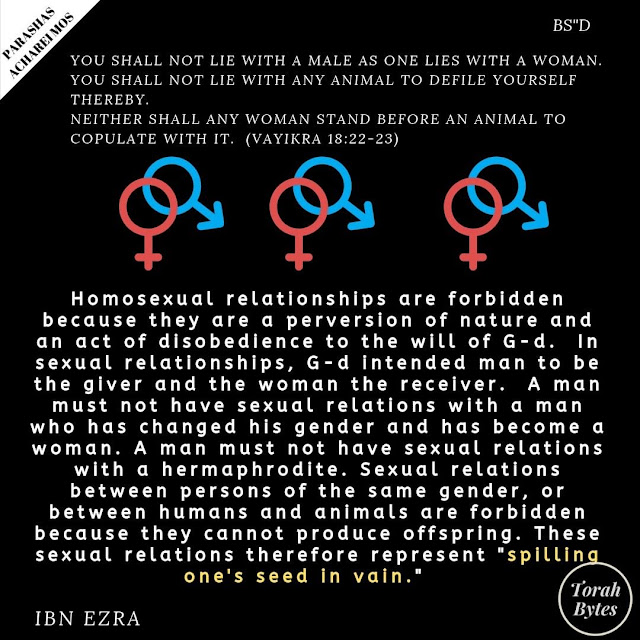 We, the undersigned Jewish bloggers, hereby protest – in the strongest terms possible – the parading and glorification of an “alternative lifestyle”, one that is classified in the Holy Torah as an abomination, especially through the streets of the holy city of Jerusalem.

The Torah demands that we live by a certain code of sexual morality, and as such, we are forbidden from certain relationships that a moral society cannot tolerate. These include incest, adultery, bestiality, and homosexuality. All these are considered grave sins in Judaism and incur the punishment of Karet, or excision from the Jewish people. An act performed with witnesses during the time of the Sanhedrin would incur an even worse consequence – namely, capital punishment.

And this is only on an individual level. When the sin is committed on a societal level, it is much worse. The Torah and our sages record how these acts were catalysts for both the Great Flood during Noah’s lifetime and the destruction of the Five Cities of the Plain.

As such, we consider any attempt to glorify acts that the Torah vehemently forbids by parading any such lifestyle through the streets with horror and utter disdain. Such parades in New York and San Francisco would be bad enough, but through the streets of the Holy Land of Israel is a thousand-fold worse. The Torah specifically warns us not to act in sexually abominable ways lest we be vomited out of the land. One can only imagine how it is viewed in Heaven when people brazenly display to G-d how abominable one can be. And if the Land of Israel cannot tolerate such acts of utter gall, all the more so in the holy city of Jerusalem, a city that is overwhelmingly religious.

We in no way wish to minimize the struggles in temptation some may have in this area and view with positivity those who have such inclinations and bravely overcome them. But those are not the people irreverently parading through the streets with rainbow flags, who show utter contempt for the Holy Torah and all we hold dear.

We therefore vehemently protest the “Pride” Parade in Jerusalem and everywhere else in the world where they may occur. We hope and pray that those who take part in such parades do a complete Teshuva for their actions, and may we see a rebuilt Jerusalem, speedily in our days, Amen.