Everything is in the Torah 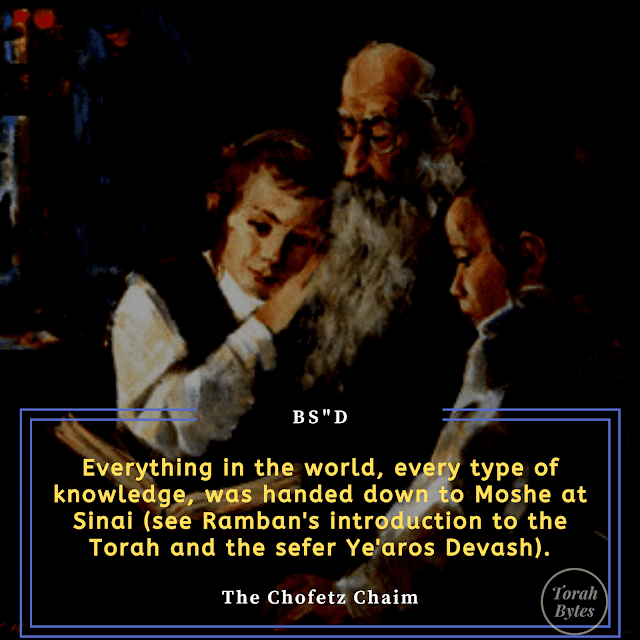 The wisdom of the Torah is infinite.  Though its language is terse, a few short verses that one can read in seconds contains as much knowledge as it would take a great scholar many years to learn.  For example, the Torah portion that talks about a man who comes to hate his new wife (Devarim 24:1-4) consists of only a few short verses.  Yet two entire tractates, Gittin (which deals wih the laws of divorce) and Kiddushin (which deals wiht marriage laws), inboth the Babylonian and Jerusalem Talmuds, and many Toseftas, which contain many thousands of laws, were written about this subject.

Most of the Talmudic order Nezikin (laws of damages), in both the Jerusalem and Babylonian Talmuds, was writen on only a few chapters of the Torah found in parashas Mishpatim.  These chapters can be skimmed in a few moments; yet in order to master the knowledge contained there, one must spend years studying it.

Even with all this, we don't have all of the Oral Torah that was given to Moshe at Sinai. The Oral Torah was much larger then, but most of it was forgotten during the exile.  The Talmud tells that the first generations had 600 orders of Mishna compared to our 6 (Chagigah 14).

Avraham, who knew all of Torah (as it says, "Avraham obeyed My voice and kept My charge, My commandments, My decrees, and My laws" [Bereishis 26:5], and our Sages explain that this includes both the Written and Oral Torah) had 400 chapters of tractate Avodah Zarah, while we have only 5 (Avodah Zarah 14).

Everything in the world, every type of knowledge, was handed down to Moshe at Sinai (see Ramban's introduction to the Torah and the sefer Ye'aros Devash).  For example, one could learn astronomy, the study of the sun, moon, and stars, from the Torah, for in order to fulfill the mitzvah of kiddush hachodesh (blessing of the new moon) one must be able to determine the onset of the new lunar month.  This knowledge was handed down to us orally and are explained in tractate Rosh Hashanah and in Rambam's Hilchos Kiddush HaChodesh.

Surgery is referred to in one single law handed down to Moshe.  This law states that when themajority of the limbs of a person's body are under the same roof as a corpse, that person becomes ritually impure. Moshe was told how many limbs there are in a human being and the exact location of each. The allusion is found in a single mishnah  at the end of the first chapter of Ohalos.

A story from Midrash Rabbah on Bereishis illustrates how every type of knowledge can be found in the Torah:

A philosopher wanted to know how long it takes a snake to lay eggs after it conceives.  He found a male and female snake that had just mated, put them into separate barrels, and fed them until the female gave birth.  When Jewish Sages arrived in Rome, the philosopher asked Rabban Gamliel how long after a snake conceives does it give birth.  The Midrash then describes how R' Yehoshua found Scriptural proof that snakes give birrth seven years after they conceive.  When the philosopher heard this, he exclaimed, "What I struggled to find out for seven years, this man has just told me in one moment."