Shidduch Advice: Should I Settle or Should I Adjust? 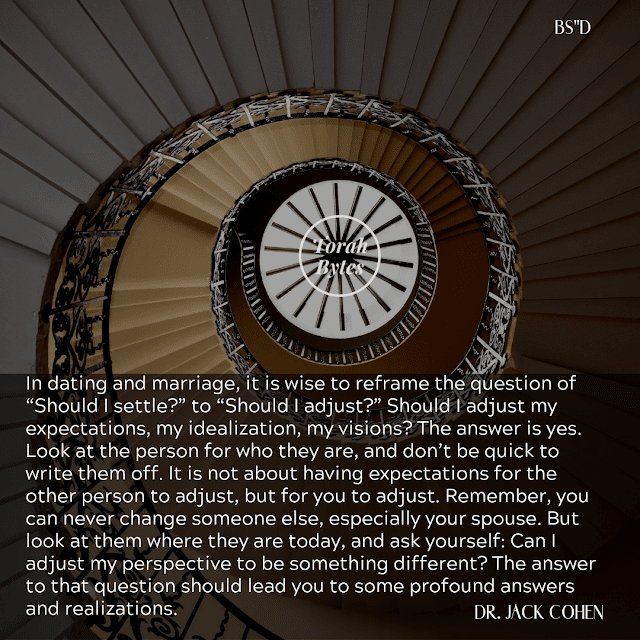 Dr. Jack Cohen
Should I Adjust?

The question is often wondered in dating, “Should I settle?” A boy and a girl meet, see something in each other that they find pleasant and attracting, but something else that holds them back. Often, the concern of marrying someone who has come from a less religious background or who grew up a baal teshuva is prominent. An individual feels that they only wish to marry someone “frum from birth,” and a boy or girl who was raised with different religious standards and values growing up, irrespective of where they are now, is grounds to reject them and move along.

While marrying someone on your religious standing is supremely important and should not be compromised, what is important to call attention to is the past versus present. What counts most is their degree of religious dedication now, not before. Moreover, focusing on the boy or girls’ family of origin, someone whose parents grew up irreligious and went on to raise their family to be frum is an attribute, not a flaw.

Consider the following story. It will be enlightening as it relates to the above concern.

It was the 1980s and Sarah, who had been raised in Paris, decided that she wished to begin dating men who had interest in spending several years learning Torah after getting married. After expressing to her family her readiness to begin dating, they began keeping an eye out for men they believed would be good prospective matches.

One evening, Sarah’s uncle brought back some good news. “Sarah, I was just in shul and was introduced to a young man named Joe who I think you would appreciate a date with.” Sarah, trusting her uncle’s judgment, agreed to the date without looking too much into it. She figured that it was just one date, and it would be worth it.

There Sarah sat, waiting in the hotel in Paris for Joe, her date, to show up. A couple minutes later, in walked a young man, dressed in jeans and a plaid shirt, who walked straight up to Sarah. “Can I help you?” Sarah asked him. “Are you Sarah Levy?” Sarah was offset. How did this man know her name? “I’m Joe,” he said proudly. Sarah paused and took a long breath. “Perhaps you mean a different Sarah Levy?” she said aloud. “I am here for a date, but the man I was supposed to meet is religious.” Joe immediately reached into his back pocket, exclaiming, “Oh, I’m so sorry!” all the while. He pulled out a yarmulke and stuffed it onto his head.

Sarah could not wrap her head around what her uncle was thinking. Sarah was certainly looking for someone religious, and for that matter, someone who even planned on devoting years to learning once married. From what she could observe of Joe, he seemed to be far from that.

“I’m going to be an architect in six months,” began Joe. “I’ll be graduating from the University of Paris soon, and will be well on my way.” From there, a lengthy conversation ensued between Joe and Sarah about life. Perfect dating conversations, but all the wrong answers for Sarah. Finally, after an hour, Sarah got up and said that she needed to leave. But then Joe threw down the gauntlet.

“You’ve told me for the past hour that you want a husband who will dedicate himself to Torah learning full-time. What if I became that guy?” Sarah couldn’t believe such a proposal. It seemed to her akin to the chances of finding an Eskimo on Miami beach. And with that, Joe and Sarah parted on friendly terms.

Sarah returned home and explained to her parents how Joe had been way off the mark for her. What did everyone have in mind? Thirty days later, Sarah received a phone call from her uncle.

“Sarah, you won’t believe the news I was just told. Joe’s father called me and said that with six months left to go until completing architecture school, Joe dropped out and decided to fly to Israel to learn in yeshiva. He would like another date with you.”
Now Sarah began to think a bit harder about her earlier decision to reject Joe. Was he really serious about learning full-time in yeshiva? Was that the type of life he really wanted? With these questions in mind, Sarah acquiesced to another date.

This time, Joe showed up with a blue shirt and slacks. Joe began explaining how his learning had been going extremely well, and he felt his soul had opened up to a new life he had never explored. At the end of this second date, Joe was ready to go on a third. But Sarah was not as eager. After briefly mulling it over, she said those oft-heard words, “Joe, I think you’re a really great guy, but not for me.” And that was it. Joe and Sarah bid each other farewell and permanently parted ways.

Over the next few days, Sarah continuing wondering if she had given up an outstanding opportunity to date Joe. He was progressing in such a nice way with his learning and was a real gentleman… But, as much as Sarah talked to herself, she couldn’t see herself marrying Joe. He had just become more religious and Sarah idealized marrying someone who had always been religious. Joe didn’t fit the mold, in Sarah’s mind. Months went by, during which Joe moved to learn at the yeshiva of Ohr Somayach in Monsey, while Sarah continued on with her daily schooling and routines.

Years later, Sarah was 29 years old, and Joe was no longer Joe, but Yosef, and after learning in yeshiva for many years and diligently applying himself, he was offered a teaching position to one hundred students in a yeshiva in Israel. Yosef, by this time, had gotten married and had a few children.

Years continued, and Sarah was now 37 years old, when word came back from Israel that there had been a terrorist attack. To her dismay, Yosef’s wife and three children had been killed.
Sometime after shiva, Yosef returned home to France to visit his family. Word reached Sarah, and the offer once again arose. Would she like to go out with Yosef? At this point, Sarah did not want to lose another opportunity. A date was set.

Sarah sat waiting, in the same hotel as years before, for Yosef to walk in. The front doors opened, and in walked a man with a Hamburg, a distinguishable hat reserved for reputable Rabbinic leaders and authorities, and a long black coat. Sarah was in shock.

Yosef took a seat and looked at Sarah. “Sarah, how are you? Seventeen years… it’s been a long time…” Sarah looked back at Yosef with a soft face. “I’m so sorry to hear about your wife…”

“Let me tell you something,” said Yosef. “Every day, my wife would go to the Kotel to daven for you, because if not for you, she never would have married me. She prayed that you would also get married and equally find happiness.” Sarah started to cry. “You and your wife looked at me so sincerely,
compassionately and lovingly, and I didn’t do the same to you. I had to have it one way and I couldn’t see beyond that.”
Yosef and Sarah wound up getting engaged and married. On the day of their wedding, Yosef provided Sarah with a special souvenir. “Please include this in our photo album,” he said. It was the first yarmulke he had ever worn, and had pulled out of his pocket on their first date ever.

In dating and marriage, it is wise to reframe the question of “Should I settle?” to “Should I adjust?” Should I adjust my expectations, my idealization, my visions? The answer is yes. Look at the person for who they are, and don’t be quick to write them off. It is not about having expectations for the other person to adjust, but for you to adjust. Remember, you can never change someone else, especially your spouse. But look at them where they are today, and ask yourself: Can I adjust my perspective to be something different? The answer to that question should lead you to some profound answers and realizations.