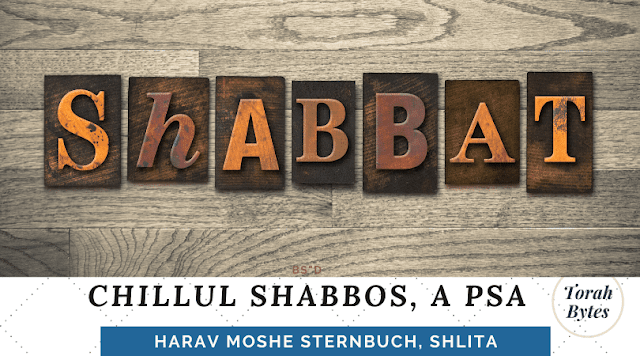 
A group of activists came to visit Rav Sternbuch a few days ago, asking him for instructions as to how to respond to the increase of chilul Shabbos, such as new public transportation on Shabbos in several towns throughout Eretz Yisroel. Rav Sternbuch responded as follows:

1. Rabbonim should make it clear in droshos to their congregants that by cancelling Shabbos in Jewish towns, we are exposing ourselves to great danger, because we made a covenant with Hashem to observe Shabbos and to make sure it is not desecrated, and if we do not keep our part of the covenant, Hashem will not keep His part chas vesholom, and remove His protection from us. We, who live in the Palace of the King, are especially duty-bound to take action in this area.

2. We have to announce and publicize to our erring brethren in towns which have public transportation running on Shabbos the severity of the prohibition of travelling on Shabbos, and that they should not think that they can remain connected to Jewish tradition and to the features of Shabbos if they use public transportation on this day. They have to be made aware that by travelling on Shabbos they are detaching themselves from religion, and causing harm to themselves, and if, on the other hand, they refrain from doing so, their reward is very great.

3. To see which bus companies are being mechalel Shabbos, and to announce that people should not use these companies, to the extent that this is feasible, so that “a sinner will not be rewarded for his sin”.

4. To organize a huge demonstration to be attended by people throughout the country on a weekday. Bochurim and avreichim should also attend. Jews are obligated to keep the Torah and Shabbos, and by being mevatel Torah they are upholding it. The Chazon Ish already noted that if people are mevatel Torah to participate in the simcha of a relative or friend, how much more so should they be mevatel Torah for Hashem’s honor. Such a demonstration will be”H make a great impression in Heaven and on earth.

5. To improve our own Shabbos observance, e.g. by learning hilchos Shabbos, being careful to observe all the hilchos Shabbos, setting aside as much time as possible time for learning, praying and singing zemiros with concentration, and making sure that our speech and thoughts are in consonance with the holy day.
Chillul Shabbos Rabbi Moshe Sternbuch Shabbos