Parashas Vayetzei: Protection from Hashem versus from Angels 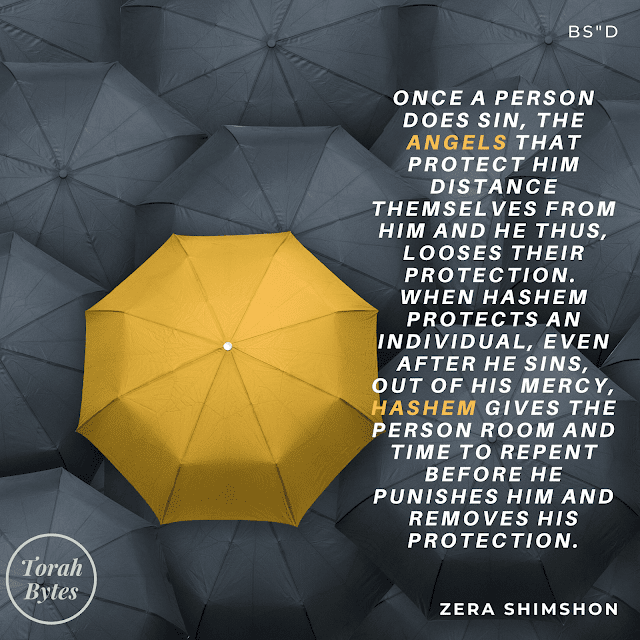 And the angels of Hashem encountered him (Yaakov). (Bereishis 32:2)

The Meforshim ask why did Yaakov need to be accompanied by angels? Hadn't Hashem promised Yaakov Avinu (28:15), "I will be with you and watch over you"? Furthermore, in Yaakov Avinu's dream, Rashi explains that the angels descending the ladder were in order to accompany him in Chutz La'aretz, nevertheless, it was in that very dream, that Hashem informed Yaakov Avinu that he would be with him and protect him. The Zera Shimshon asks why did Yaakov Avinu need two forms of protection?

The Zera Shimshon answers these questions with a very interesting concept.

The protection given by angels is different than that given by Hashem himself.  The angels that protect a person are those created by his own good deeds. They are obligated to protect him from all harm.  This kind of protection does not subtract from his merits. However, the protection he receives from these angels is only in accordance with the laws of nature.  They will not protect him in a supernatural fashion.

On the other hand, when one merits being protected directly by Hashem, the protection is above the laws of nature and one is protected in a supernatural manner.  The result of this is that this protection diminishes from his eternal reward as the Gemara (Shabbos 32a) teaches regarding one who is saved by a miracle.

However, when a Tzaddik merits a special promise from Hashem that He will protect him, as Yaakov Avinu did, this kind of protection is above the laws of nature and as well, does not subtract from one's merits, since otherwise, of what benefit would such a promise be?

Another difference between the protection given by angels versus that given by Hashem, is that being that Gemara (Sota 21a), teaches that one's sins can wipe out his mitzvos, the angels that were created by his mitzvos, protect him from sin -- for their own good, since they do not want to be rejected from their posts. However, when Hashem protects a person, even though He saves him from the Yetzer Hara, He doesn't take away his free will from him.  Instead, Hashem strengthens the person's Yetzer Hatov to overpower his Yetzer Hara.

Yet another difference is that once a person does sin, the angels that protect him distance themselves from him and he thus, looses their protection.  When Hashem protects an individual, even after he sins, out of His mercy, Hashem gives the person room and time to repent before He punishes Him and removes His protection.