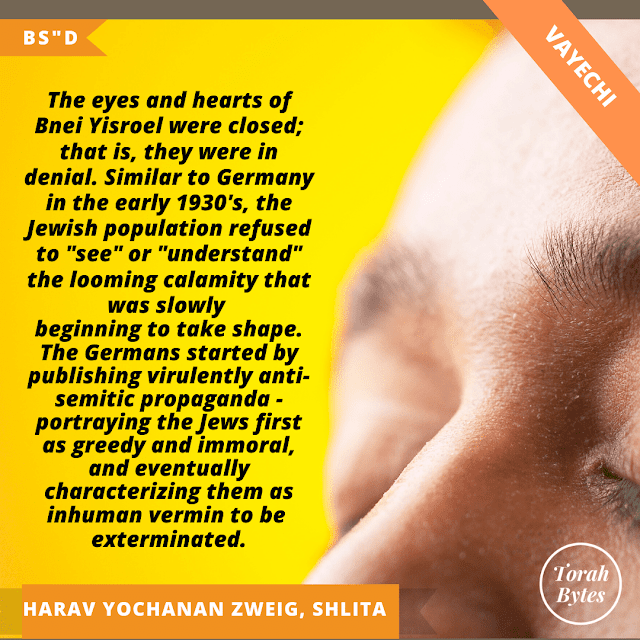 Business as Usual
based on the Torah of HaRav Yochanan Zweig, shlita

Jacob lived in the land of Egypt seventeen years... (47:28)
Rashi (ad loc) points out that this week's parsha opens without the customary delineation that is commonly found between two parshios. That is, the Torah is generally broken up into paragraphs and chapters - known as "p'suchos" and "stumos." A chapter ending is indicated by leaving the rest of the line open and a paragraph break is delineated by leaving nine letter spaces blank. However, this parsha begins with no break in the writing from the previous parsha.

Rashi goes on to explain that this parsha is "sossum" or "sealed" because this parsha contains the death of Yaakov Avinu, and once he passed away the hearts and eyes of Bnei Yisroel were closed from the suffering of the enslavement, for that is when the Egyptians began to enslave them.

Yet this Rashi is directly contradicted by another Rashi in Parshas Va'eira (Shmos 6:16). Rashi says there that the reason the Torah records the age of Levi when he passed away is teach us how many years the enslavement lasted. As Rashi explains, Levi lived longer than any of his brothers and "as long as Yosef and his brothers were alive the enslavement did not begin." Levi died approximately seventy-seven years after Yaakov Avinu. So, at which point did the enslavement begin?

Furthermore, Rashi's use of the word "sossum" to indicate that this parsha is sealed is a little hard to understand. The halachic definition of a "stuma" would include a nine letter gap, and Rashi's whole point is that here we have no gap at all. Moreover, Rashi seems to be taking poetic license to describe the pain and suffering of Bnei Yisroel ("The eyes and hearts of Bnei Yisroel were sealed from the enslavement"). This is odd; Rashi doesn't write poetry - Rashi gives us the literal meaning of the words of the Torah. What does Rashi mean by these words?

A careful reading of Rashi reveals that he is describing a remarkable phenomena. Rashi is telling us that the eyes and hearts of Bnei Yisroel were closed; that is, they were in denial. Similar to Germany in the early 1930's, the Jewish population refused to "see" or "understand" the looming calamity that was slowly beginning to take shape. The Germans started by publishing virulently anti-semitic propaganda - portraying the Jews first as greedy and immoral, and eventually characterizing them as inhuman vermin to be exterminated.

Nevertheless, the vast majority of the Jewish population willfully ignored the warning signs, refusing to see or internalize what was really going on. Even many years later, the German Jewish population was shocked that "their" country and "fellow citizens" suddenly turned on them and shipped them off to die. In truth, by 1939 it had already been a decade in the making. Part of the human condition is to ignore what we don't want to see.

That is what Rashi is teaching us here. Rashi points out that the parsha containing the death of Yaakov is written like every other verse of the Torah, with a one-space gap between the verses. The Torah writes it thusly to indicate that this event was not differentiated from anything else in their lives.

The transition of Yaakov's death, which should have been understood as a momentous signpost on the road to their enslavement, passed without anyone noticing - they sealed their eyes and hearts to the coming slavery. The entire generation was in denial of the looming enslavement, ignoring the slowly changing attitude of the Egyptians that began with the death of Yaakov. By the time Levi passed away, the transition of the Egyptian attitude was complete and the actual slavery began.
antisemitism Rabbi Yochanan Zweig