Greet the Public with a Happy Countenace 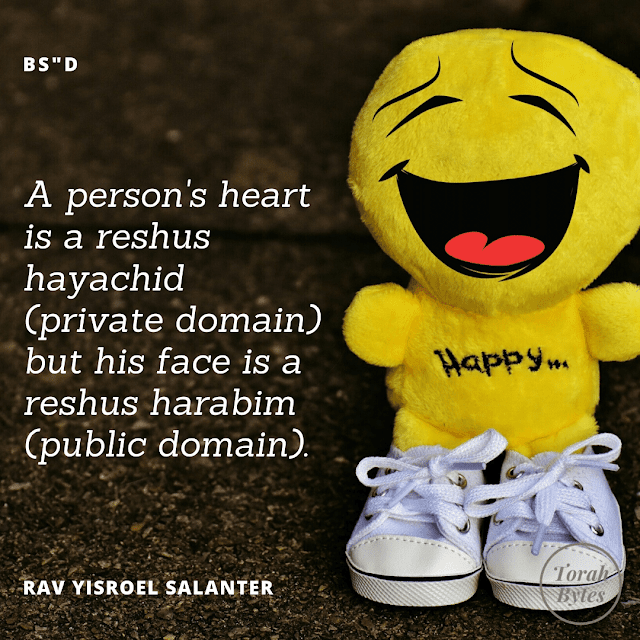 Rav Yechiel Mordechai Gordon, the Lomza Rosh Yeshivah was on a fundraising mission in the United States when World War II broke out. He had left his wife and children in Nazi-occupied Poland and his concern for their safety was constantly on his mind.  He became terribly fearful when the occasional letters from them stopped coming.  One day a Jew from Lomza who had miraculously escaped the Nazi inferno visited him.  He told him the tragic news that he had been an eyewitness to the massacre of most of Rav Yechiel Mordechai's family. Words cannot describe the scene as the long suspected news was confirmed.

Suddenly, the door opened and a guest came  in to see the Rosh Yeshivah. Rav Yechiel Mordechai's countenance changed radically.  He greeted the visitor with a hearty Shalom Aleichem and warm smile. The conversation soon ended, and the visitor left.  The man who had brought the tragic news sat transfixed in disbelief at the transformation that had taken place before his eyes.  He asked Rav Yechiel Mordechai how his countenance could change so rapidly. Rav Yechiel Mordechai replied, "Rav Yisroel used to say that a person's heart is a reshus ha'yachid (private domain) but his face is a reshus ha'rabim (public domain)..."

Obviously, it is not a simple matter to do what Rav Yechiel Mordechai did.  When a husband comes home after a very difficult day at the office, it is not easy for him to put a big smile on his face as he enters his home.  A human being is not a machine where with the press of a button the whole picture can change. Nevertheless, many things can be accomplished through repetitive actions.  With practice, one can get used to having a cheerful smile on his face and thereby greet every person in a pleasant manner. If one realizes that replacing a "sour" face with a smile is an act of chesed, it gets a little easier to do.