The Definition of Being a Jew (Vayechi) 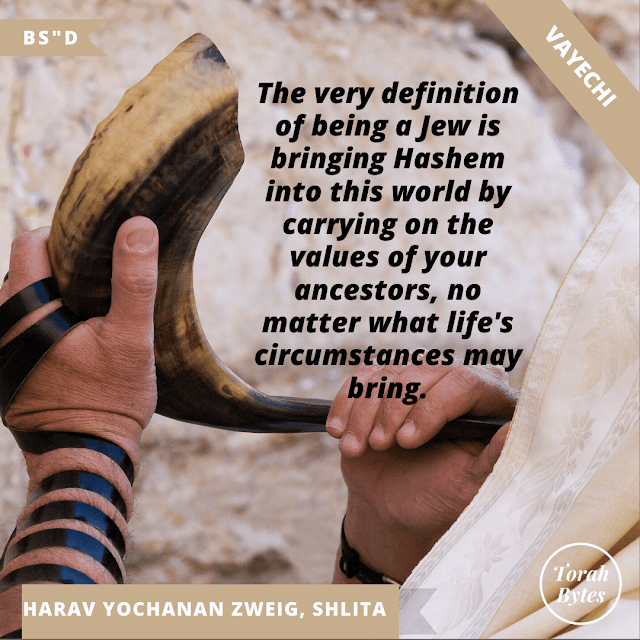 And he blessed them that day, saying, "In you shall Yisroel bless, saying, 'May Hashem make you as Ephraim and as Menashe'" (48:20).

This week's parsha introduces us to the blessing that Jewish fathers all over the world bless their sons on Friday nights. The text of this bracha is that which Yaakov Avinu composed when Yosef introduced his sons Ephraim and Menashe to Yaakov, "May Hashem make you as Ephraim and as Menashe."

There has been much speculation as to what Yaakov intended when he blessed them. After all, very little is known about the actual lives of Ephraim and Menashe. Why would he designate them specifically as the paradigm with which all parents should bless their children?

One of the more common answers given is that Ephraim and Menashe are the first two brothers in the Torah who don't have a bitter rivalry or fight with each other. After all, the Torah is replete with stories of brothers in conflict: Kayin and Hevel, Yishmael and Yitzchak, Yaakov and Eisav, Yosef and his brothers, etc.

Still, this approach is difficult to accept. First, there are many examples of brothers in the Torah who show no specific animosity to one another: Shem, Cham, and Yefet, and Avraham Avinu and his brothers, to name a few. Second, we have no specific indication that Ephraim and Menashe had a unique fraternal relationship. Third, it isn't a law of nature that brothers have to be in conflict, many famous brothers lived in harmony, such as Moshe and Aharon. Finally, it is highly improbable that none of the children of the other shvatim had positive sibling relationships; why should Yaakov single out only Yosef's children for that reason?

Ramban (ad loc) comments that this bracha was a specific blessing to Yosef. When the possuk says, "in you shall Yisroel bless" this refers to Yosef himself. This sentiment is echoed by Targum Yonason Ben Uziel, who adds that this bracha is also given on the day of a boy's bris. Ramban also says (48:15) that Yosef may have actually had more children after Yaakov and his family settled in Egypt, but this bracha was specifically regarding only Menashe and Ephraim. If this bracha is really for Yosef, why does Yaakov specifically designate only Ephraim and Menashe?

Yaakov is alluding to a very powerful message, one that would be crucial to all generations of Bnei Yisroel to come. Yosef had come to Egypt as a slave, sat in jail for a few years, and then rose to the highest possible position of authority, below only Pharaoh himself. Egypt was a place well known for immorality and idol worship. Yet, through it all, Yosef was able to maintain who he was and even raise children with the same values that he had absorbed from the house of his father Yaakov. Yaakov is alluding to this remarkable accomplishment and foretelling the importance of this for future generations.

We bless our children that they should be like Ephraim and Menashe; children who grew up in an environment totally bereft of holiness, yet persevered in representing the values of their father and the Jewish people. Yosef raised children under the most difficult of circumstances and they turned out exactly like him. This is also why Yaakov gives them the ultimate recognition by replacing Yosef with them among the shvatim, each one heading his own tribe.

This further explains why we give our sons this blessing on the day of their bris. The day of one's bris a child is "brought into the covenant of Avraham Avinu." Avraham Avinu came from a family of idol worshippers and rose to make it his mission to bring Hashem into a world that had no knowledge of His presence. The very definition of being a Jew is bringing Hashem into this world by carrying on the values of your ancestors, no matter what life's circumstances may bring.
Rabbi Yochanan Zweig