The Teshuva Story of Yosef M'shisa 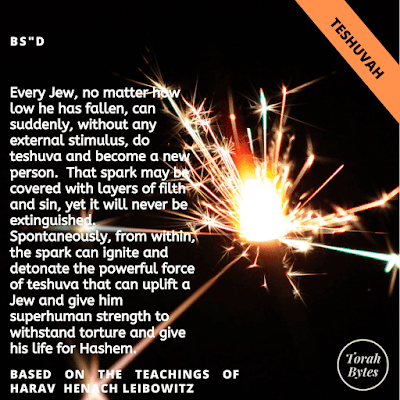 Yosef M'shisa was a Jew who collaborated with the Romans during the destruction of the Beis HaMikdash. The Romans wanted a Jew to be the first to plunder the sacred vessels of the Temple and offered him the prize of keeping whatever he selected for himself. Yosef M'shisa agreed and brazenly emerged with the golden menorah as his booty.  The Romans told him that his prize was too prestigious for a commoner; he should enter a second time and seize a different vessel.  Abruptly, Yosef refused.  Some transformation had suddenly occurred within him, and even when the Romans offered three years' worth of royal taxes to entice him, he replied, "Is it not enough that I have angered G-d one time that I should now anger Him a second time?"  The Romans tortured him as he cried out, "Woe is to me that I have angered my Creator!" Yosef died in complete teshuva, sanctifying Hashem's Name.

What caused this dramatic change in Yosef M'shisa?  A moment ago he was a despicable traitor, collaborating with the enemy and brazenly plundering the Beis HaMikdash.  Suddenly, he becomes a different person -- with the commitment to withstand brutal torture and to willingly give his life rather than commit a sin he had gladly violated a minute earlier.  No one rebuked him, and yet there was a complete upheaval of his entire being -- from where?

The secret of Yosef's turnabout is the spark of spiritual strength latent in every Jewish soul.  Every Jew, no matter how low he has fallen, can suddenly, without any external stimulus, do teshuva and become a new person.  That spark may be covered with layers of filth and sin, yet it will never be extinguished.  Spontaneously, from within, the spark can ignite and detonate the powerful force of teshuva that can uplift a Jew and give him superhuman strength to withstand torture and give his life for Hashem.

The ability to rise from the lowest depths and turn to Hashem in teshuva is the true hallmark of the Jewish people.  Yosef M'shisa epitomizes this quality. Our nation will always have its saints and spiritual giants reaching dizzying heights of sanctity.  Yet, the one universal trait that defines us all is that spark, that ability to reach upward towards Hashem in complete teshuvah, no matter how far we may be.  May we utilize this vast potential within us to elevate ourselves with sincere teshuvah and turn toward the waiting arms of our loving Father in Heaven.

Source: The  Majesty of Man, based on the teachings of HaRav Henach Leibowitz, zt"l
Teshuvah