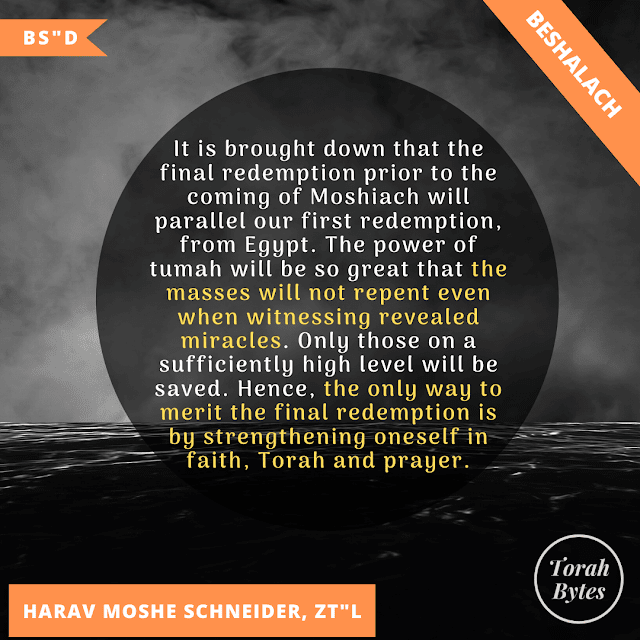 based on the droshos of Harav Moshe Sternbach, shlita

“And the bnei Yisroel were armed [chamushim] when they went up out of Egypt” (Shemos 13:18) Rashi: One out of five [chamisho] went out, and four fifths died during the three days of darkness. [The medrash also cites opinions that one of 50 or one of 500 went out].


Rav Moshe Schneider would cite this medrash, and express amazement that so many people who had witnessed eight plagues (prior to the plague of darkness), and how Hashem had distinguished between the Jews and the Egyptians, were not found worthy of being redeemed. He would add that it is brought down that the final redemption prior to the coming of moshiach will parallel our first redemption, from Egypt. The power of tumah will be so great that the masses will not repent even when witnessing revealed miracles. Only those on a sufficiently high level will be saved. Hence, the only way to merit the final redemption is by strengthening oneself in faith, Torah and prayer.

Regarding the question why the majority of the Jews remained wicked despite witnessing miracles, Rav Sternbuch explains that they were not necessarily completely wicked, but their sin rather consisted in their desire to remain in Egypt due to having been appointed to positions of power by the Egyptians and being wealthy (see Shmos Rabbo 14:3). Since they did not wish to be redeemed, they did not merit redemption, even though they were not completely wicked.
Beshalach Chamushim Geulah Mitzrayim Rabbi Moshe Schneider Rabbi Moshe Sternbuch Teshuva