This is an English translation of the letter signed and dated by HaRav Moshe Sternbuch, shlita, Ra'avad of Yerushalayim, on March 26, 2020 attached below.
Be”H
Rosh Chodesh Nissan 5780
Due to our many sins a plague has spread amongst the Jewish nation in all their places of residence, and the whole world is on fire and raging. Sorrow and sighs are rampant in many Jewish homes. It is the time of divine wrath, and the gemoro (Menochos 41a) explains that when divine wrath is prevalent in the world, Hashem punishes even for positive commandments, which He usually does not do. Therefore, during these times we must be exceedingly careful about our actions to make sure that they do not contain any flaws with regard to positive commandments, and all the more so with regard to negative commandments. In addition, we are obligated during these times to conduct an account of actions, and to improve whatever needs to be improved. Let us search our ways and examine them and return to Hashem, thereby removing Hashem’s anger from us.
When the attribute of justice rules in the world, it demands the punishment of death for any sin, just like someone who rebels against the King is liable to capital punishment. Many are asking for advice as to how to be saved during such a time.
However, our Sages have taught us advice about how to change Hashem’s conduct with us -that He will not treat us with the attribute of justice, but rather with the attribute of mercy. Oour Sages say (Shabbos 151b), “Whoever has mercy on his fellow human beings, will receive mercy from heaven”. This is an escape route for everyone at this time, to help each other in any way possible, physically and financially. Thereby we will merit to change the attribute of justice to the attribute of mercy, and will automatically merit to be saved.
Therefore, during these days in which people are eagerly awaiting kimcha depischa (Pesach charity funds), and when, due to our many sins many people are impoverished at this time, and do not have the means to buy the necessary items for the festival, benefactors should be aroused to give charity generously, and thereby arouse for themselves divine mercy and merit to be saved from the plague and any evil occurrence. Whoever gives charity during a time of trouble such as a plague, this is a wonderful recipe for him and his family members not to be harmed.
One must know that sometimes Hashem sends a person a blessing for his business “on credit”, so that he will be able to donate to the needy also during a time of trouble that occurs subsequently. It thus turns out that if during a time of trouble he locks his door, he is repaying bad for good, in that Hashem has given him a bounty in advance prematurely. On the other hand, if he also gives during such a time he enjoys a double reward, both in this world and the next, as the Sages have already said (Bovo Basro 11a), King Monbaz emptied the royal treasury containing the treasures that both he and his ancestors had horded during a time of famine, (and distributed them among the poor. His family objected - on the grounds that he was squandering the wealth that his fathers and his grandfathers had amassed), but he responded that his fathers had stored their wealth below, but his was now stored in Heaven.
The gemoro in Brochos (59b) states that if someone’s father died and he inherits him, he recites Boruch Dayan Hoemess and then Boruch Hatov Vehmeitiv. So we see that even during a time of trouble, we have to thank Hashem for His kindness in the middle of misfortune. Therefore, during this time even though we are in the middle of a difficult situation, we must still thank Hashem that out of about 2500 sick people in Eretz Yisroel not  dozens have died, as occurred in other countries in this situation. This is only due to the kindness of Hashem in His country, Who guards his country and inheritance. And we hope that Hashem will increase his kindness and cure all the sick (see also Brochos 60a: “At the present time, in any case, it is a favor”). Let us increase our prayers and charity and faith, and we will see wonders.
We are currently situated in the birth pangs of moshiach. Let us search our ways and examine them and return to Hashem, and we will see the wonders of Hashem and His kindness. May the Guardian of the Jews protect the remainder of the nation, and may the nation of the Jews who say Shema Yisroel not be destroyed. May Hashem accelerate our redemption and may His name be sanctified shortly with the coming of moshiach our savior righteous one, Omen, may this be His will.
I anticipate great heavenly mercy
[signature + stamp] 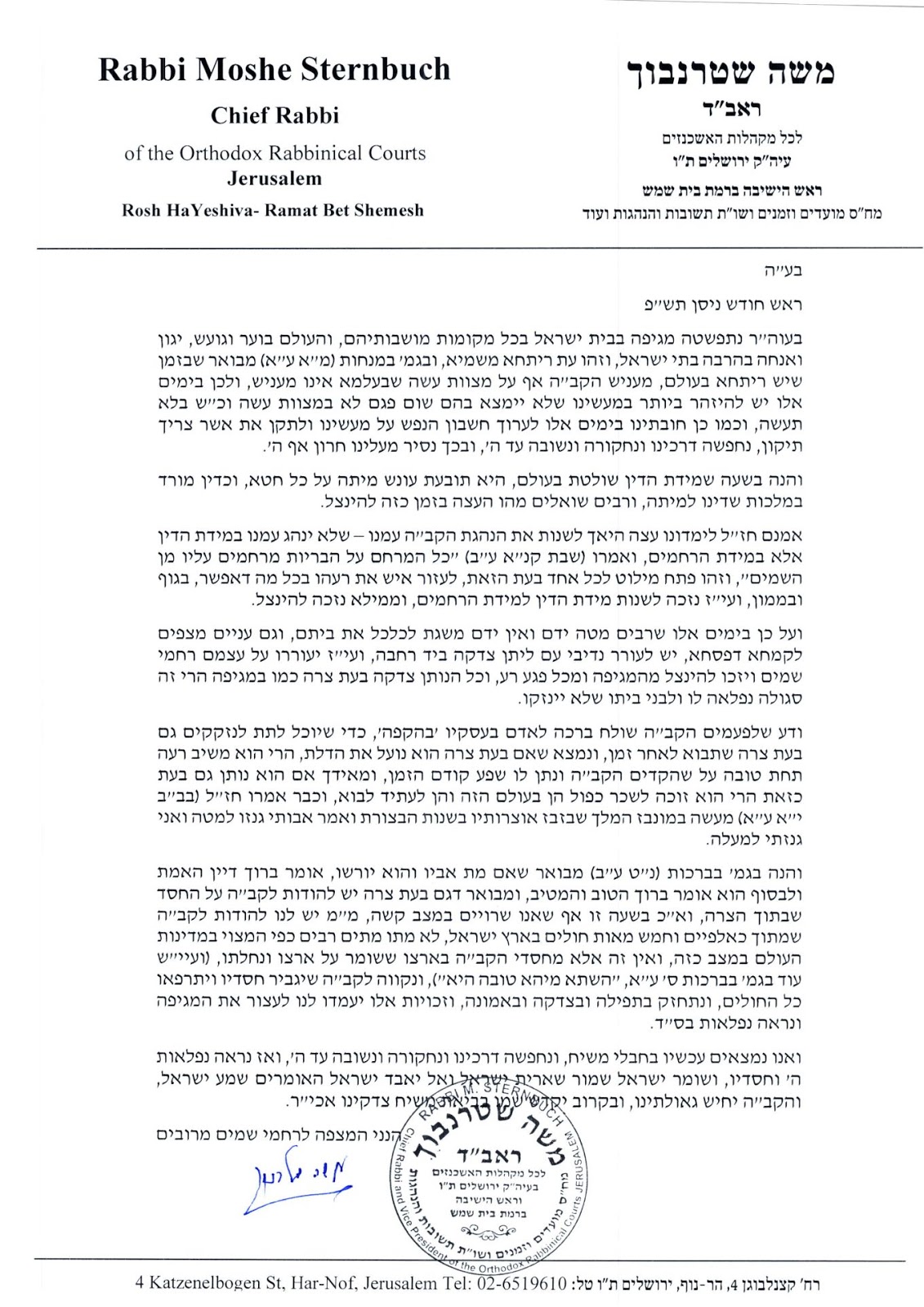