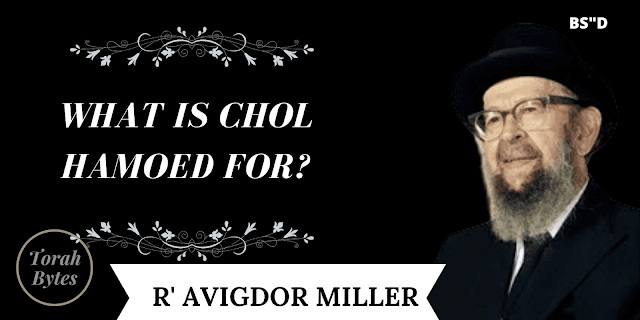 Rav Avigdor Miller on How To Use Chol Hamoed


Q: What does the gemara mean when it says כל המבזה את המועדות כאילו עובד עבודה זרה – “Anyone who disgraces the yomim tovim, it’s considered as if he worshipped idols”?

A:
It says in the possuk, אלהי מסכה לא תעשה לך – You should not make molten gods for yourself; and that possuk is immediately followed with the words את חג המצות תשמור – You should guard the Yom Tov of Matzos. And the gemara explains that these two pesukim were written next to each other in order to teach us this lesson: If you disgrace Yomtiv so it’s as if you worshipped avoda zara.

Now, according to many, that statement is talking about chol hamoed specifically. It’s a rebuke against those who are disrespectful to chol hamoed by engaging in melacha. Now, I must say at the outset, that some people can’t help themselves and they have to go to work on chol hamoed – their heter is addressed in the Shulchan Aruch – but the gemara is also referring to those who disgrace chol hamoed by treating it simply as any other weekday; as if it’s a Sunday, a vacation day.

And so we’ll explain it as follows. The yomim tovim are intended to rejuvenate the spirit in each of us. During the year, you have to go out into the world and often you have to mix with the gentiles – maybe you work in a non-Jewish environment and even if not, but you’re influenced by the gentile environment. It’s difficult to maintain an elevated state of ruchniyus week after week if your mind is constantly surrounded with gentile ideas. And now Pesach comes along and you have the chance now to recharge your batteries. We spend time on Yomtiv – on chol hamoed too – only with frum Jews and we’re expected to use that time to think over all of the great lessons that the Yomtiv is teaching us. We have to spend the minutes of chol hamoed filling up with ruchniyus, recharging our batteries.

Now, I know that it has become a minhag to take trips on chol hamoed and I don’t want to say that you shouldn’t do it. However, the truth us that chol hamoed wasn’t meant to be a vacation time. When we treat chol hamoed like that, when we treat it lightly, so we’re interrupting the recharging of our batteries, and that puts us at risk of sinking chalila to the level of the non-Jews. We don’t maintain our spiritual level properly and that’s how we become more susceptible, we are more easily influenced by the ways of the umos ha’olam and it could be someone will even succumb to the depths of avoda zara, chas v’shalom.

It’s important to find productive ways to utilize chol hamoed – even for children. There is a tzadik in Boro Park who every chol hamoed he gathers together many children and he takes them to talmidei chachomim, to tzadikim, to listen to them. It’s a practice that should be copied by others – that’s using chol hamoed properly. In your own house, you can make a seudah on chol hamoed. Besides for the regular seudah, you can make a party for the children too. Give them nosh. Sing songs with them. Talk to them about the Yomtiv. Whatever it is, you must find ways to use chol hamoed properly.
Avodah Zara Chol Hamoed Gemara Rabbi Avigdor Miller