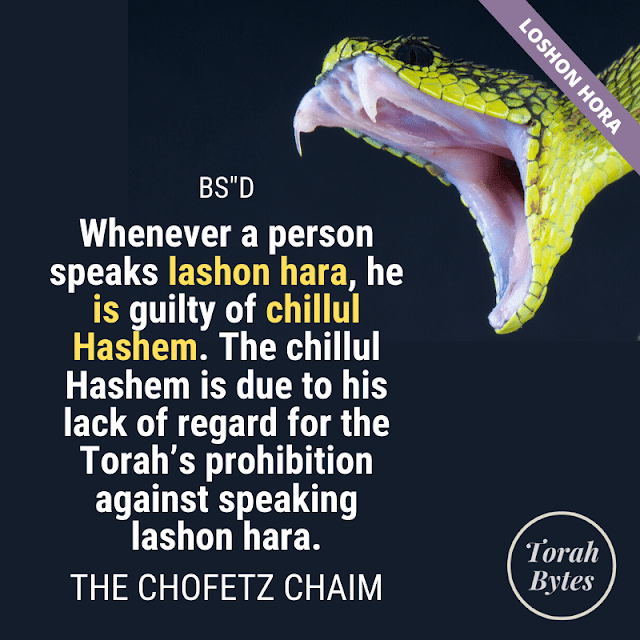 
In his preface, the Chofetz Chaim taught that whenever a person speaks lashon hara, he is guilty of chillul Hashem. The chillul Hashem is due to his lack of regard for the Torah’s prohibition against speaking lashon hara.

Just as there are various levels of kiddush Hashem, so too are there various levels of chillul Hashem. When a Jew speaks negatively about his fellow Jew before non-Jews, his sin is particularly severe. When a Jew speaks badly of a Jew before other Jews, there is a reasonable possibility that his listeners will not accept his words as fact. After all, why should they believe something negative about a fellow Jew, especially since they know that the speaker is sinning by issuing his report?

A non-Jew, however, will probably be quick to believe anything negative that one Jew has to say about another. Aside from this, says the Chofetz Chaim, when a Jew speaks badly about Jews to non-Jews, he is desecrating Hashem’s Name.

Think about it: What might go through a non-Jew’s mind when he hears Jews speaking badly of other Jews? “After all these years of suffering and persecution, these Jews still can’t get along. My goodness, all those nasty things he said about that fellow — and more! Where is their loyalty to each other? Aren’t they the ones who preach about loving your fellow as your very own self?” 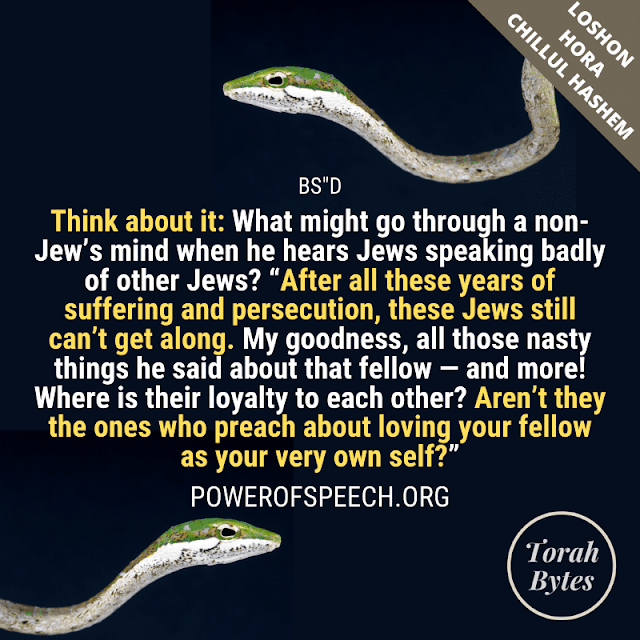 Rabbeinu Yonah, one of the great Rishonim (Early Commentators), writes that other than death, there is only one way to atone for the terrible sin of chillul Hashem. Someone who has brought disgrace upon Hashem’s Name can be forgiven through kiddush Hashem, bringing glory to His Name.

1 A person who has spoken lashon hara about Jews to non-Jews and wishes to repent should make a special effort to show the world the greatness of Torah and the beauty of its ways. As our Sages teach:

“And you shall love Hashem, your G-d”

The Chofetz Chaim also discusses the tragedy of a moser, informer. A Jew who informs on his fellow Jews to non-Jews, and thereby brings suffering and misery upon them, is a grave sinner who may never be able to fully repent for his sins. Of such a person, the Chofetz Chaim says “His sin is too great to bear.” This expression, borrowed from Parashas Bereishis, where Kayin murders his brother, Hevel, shows us the seriousness of the sin of malshinus, informing.

The sin of speaking lashon hara about a Jew to a non-Jew is particularly severe and is a great chillul Hashem.

The sin of a moser (informer) is too great to bear. 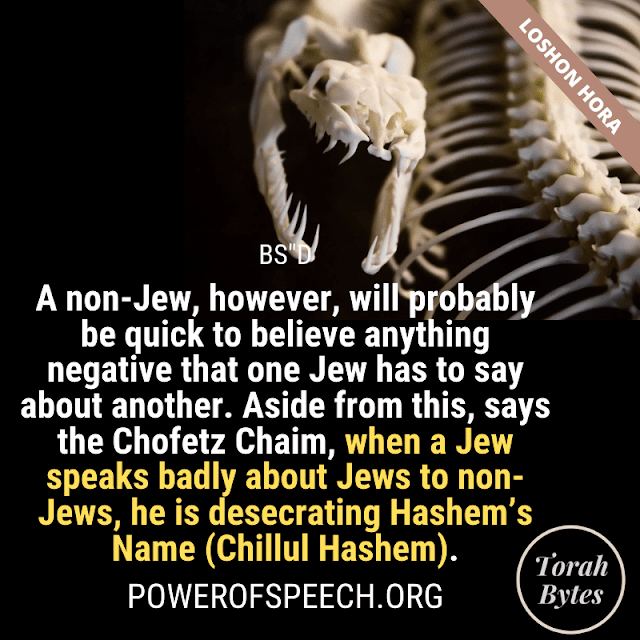