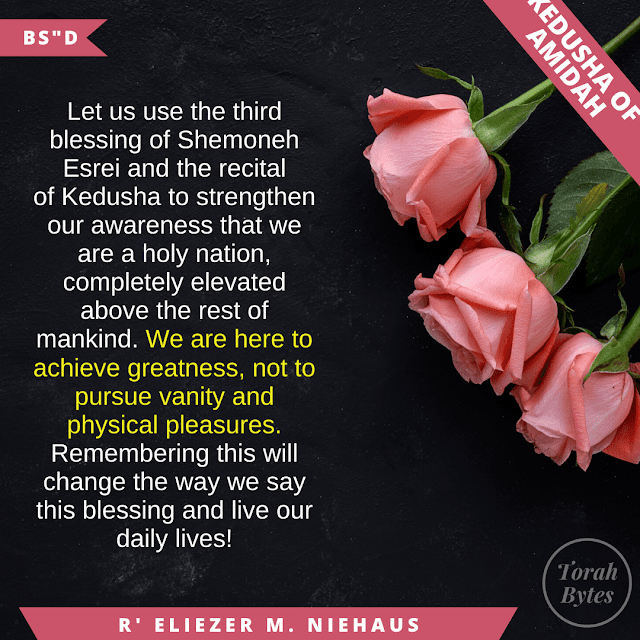 Countless mighty and pure angels wait in silence with trepidation and anticipation. Suddenly, voices rise from the earth below. “Kadosh! Kadosh! Kadosh! Hashem Tzivakos, melo chol ha’aretz kevodo!” Immediately, multitudes of fiery Serafim open their mouths and join in with gorgeous harmony and say Kadosh three times. And then, utter silence. Once again, pure words rise from below: “Baruch kevod Hashem mimkomo!” With a great roar, the magnificent Ofanim and the holy Chayos join this most exalted praise of Hashem.
The Gemara (Chulin 91b) states that the angels in Heaven do not have permission to recite kedusha until we begin saying it here on earth. Even though they are so holy and perfect, Hashem is more interested in our recital of kedusha!
Furthermore, the Mishneh Berurah (125:5) cites the mind-boggling words of the Sefer Heichalos. “Hashem says: ‘Tell My children what I do when they say Kadosh, kadosh, kadosh, and teach them that they should lift up their eyes to Heaven and lift their bodies upwards, for I have no greater pleasure in the world than the moment when we look into each other’s eyes. At that moment I grab the form of Yaakov that is etched into My throne and hug it and kiss it and remember their merits and hasten their redemption.’” The Ohr Zaruah adds that when we say kedusha the breath of our words rises to Heaven like pleasant fragrances.

Kedusha: Above and Beyond
In order to understand why kedusha is so important, let us begin by explaining its words. Kadosh means something that has been separated and designated. For example – when one sanctifies an animal as a korban, he is “makdish” it, for he separates it from mundane purposes and designates it as a korban. When one performs the first step of marriage and gives a woman a ring, he is “mekadesh” her. Through this action he separates her from the entire world by making her forbidden to them and designates her to become his wife. When we say Hashem is kadosh we mean that His Holiness and perfection are so great that He is completely separated from this world. He is not just in a different league – there is nothing to which He can be compared!
This is exactly what we say in the third bracha of Shemoneh Esrei: “Atah Kadosh – You are Holy.” It is absolutely impossible to comprehend who and what Hashem is. He has no connection whatsoever to anything we can grasp in our mundane world. “Ve’shimcha Kadosh – Your name is holy.” Usually, the name of a person or object basically tells us what it is. Regarding Hakadosh Baruch Hu, His name does not tell us anything about Him Himself, since that is impossible to understand. Rather, it describes how He acts. For example, when we say Hashem is “the Merciful One, the Mighty One, the Kind One etc.,” we mean this is how He acts. But lest we think that these descriptions give us a basic understanding of how Hashem acts, we say that even His name is Kadosh. We only see what He chooses to reveal to us – and that gives us no inkling of what Hashem really does.
We then conclude: “U’kedoshim bechol yom yehalelucha selah – the holy ones praise you every day eternally.” Some commentators say the “holy ones” refers to the angels, and others say it refers to Klal Yisrael. Either way, we say that only those who are holy can praise Hashem. In order to begin to contemplate the holiness and purity of Hashem, one must be separated from the physicality and materialism of this world. The holier a person is, the more he can praise Hashem, the One who is the epitome of holiness.

Transient Angels
In the blessing of yotzer ohr before Krias Shema we describe how the angels say kedusha. When we say Atah kadosh during the silent Shemoneh Esrei we also praise Hashem’s holiness, but not the same way the angels do. However, when the chazzan reaches this blessing during his repetition, we rise to the level of the angels and actually say kedusha just like them. We can understand this with what we find in the seforim, that the repetition of the chazzan brings us to a higher place in heaven than when we recite our own Shemoneh Esrei!
Since we are now on the level of angels, we act like them. We place our legs together to look like we have only one leg just like malachim, and we lift ourselves up on our toes, as if we are flying upwards. The Rema writes (O.C. 125:2) that we also raise our eyes to heaven. We saw earlier the words of the Sefer Heichalos that doing so creates an extremely intimate bond with Hashem and gives Him extreme pleasure!

Three Times. Three Places.
Then we say Kadosh three times. The first Kadosh proclaims that Hashem is beyond any comprehension even in the upper heavens, the location of the angels and neshamos. The second Kadosh says that He is also the epitome of holiness in the lower heavens – the place where the stars and constellations are found. The third Kadosh says that He is completely uplifted and above the mundane world where we are located.
Nevertheless, even though He is so holy, “melo chol ha’aretz kevodo.” He has a deep connection to the entire universe and is involved in its every aspect. But how can He be so Holy, and still be involved in the lowliest aspects of the world? That is why we say “Hashem Tzevakos – Master of Legions.” Hashem is the master of all the powers in the universe and can do what appears to be impossible.
Now, this statement implies that we understand where Hashem’s location is – He is everywhere. But if we have no comprehension of who Hashem really is, how can we dare confine Him to any location? And the truth is that this question even perturbs the angels, as we say in the kedusha of musaf: “His ministering angels ask each other ‘Where is the place of His glory?’”
Therefore, we continue and say their answer: “Baruch kevod Hashem mimkomo – Blessed is the glory of Hashem from His place.” Hashem’s “place” is a different type of place, one which only He can understand. Therefore, we leave it simply as “His Place” and say that He gives us the greatest blessings, the ones that can come only directly from Him, from His place!
We conclude “Hashem shall reign forever, your G-d, Zion, from generation to generation, Hallelukah!” We pray that this beautiful revelation with our personal connection should continue forever, and that can only happen completely when the Bais HaMikdash will be rebuilt in Yerushalayim.
Now we understand why Kedusha is so precious to Hashem. At this moment, we fulfill the purpose of our creation, to rise to the level of the holy angels in this mundane world and praise Hashem with the same deep understanding that they have: That Hashem is exalted above and completely separated from any of the limitations of material existence!
Let us use the third blessing of Shemoneh Esrei and the recital of Kedusha to strengthen our awareness that we are a holy nation, completely elevated above the rest of mankind. We are here to achieve greatness, not to pursue vanity and physical pleasures. Remembering this will change the way we say this blessing and live our daily lives! 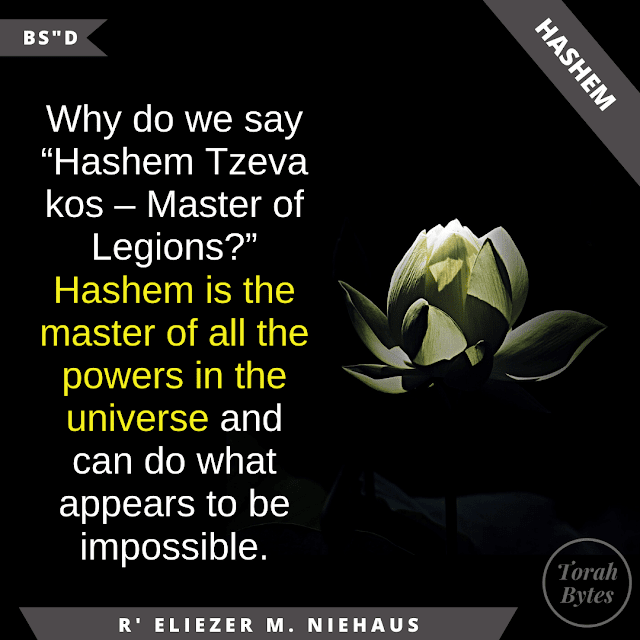