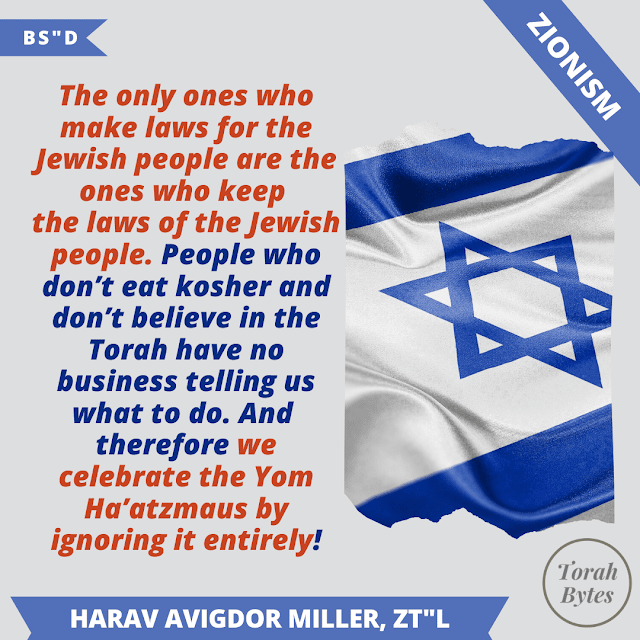 Q:  How should we celebrate Yom Ha’atzmaus?
A: The answer is that you should not. And I’ll tell you why. Yom Ha’atzmaus is a day that was invented not by the chachmei hatorah. It was invented by a group of atheists called the Knesses. Now, in the Knesses there are some decent people too, but the majority are atheists. When atheists get together and they pass a law that this and this day should be celebrated by the Jewish people, so we honor them with a sneeze. We ignore them entirely.

The only ones who make laws for the Jewish people are the ones who keep the laws of the Jewish people. People who don’t eat kosher and don’t believe in the Torah have no business telling us what to do. And therefore we celebrate the Yom Ha’atzmaus by ignoring it entirely!

How can we demonstrate any kind of sympathy with a State that is diametrically opposed to the Torah?! The mere fact that they draft girls into the army is such a horrendous contradiction to Jewish tradition, to Jewish attitudes, that for that alone, every conscientious Jew should feel a tremendous hostility to the State of Israel.

Now, we pray always for our fellow Jews wherever they are. Whether they’re in Buenos Aires or in Poland or in Eretz Yisroel, we pray for our fellow Jews. But when it comes to making laws, we don’t listen to the atheists at all! And so we ignore the day entirely. It means nothing at all.
TAPE # 821 (April 1991)
Medinat Yisrael Rabbi Avigdor Miller Yom HaAtzmaut zionism