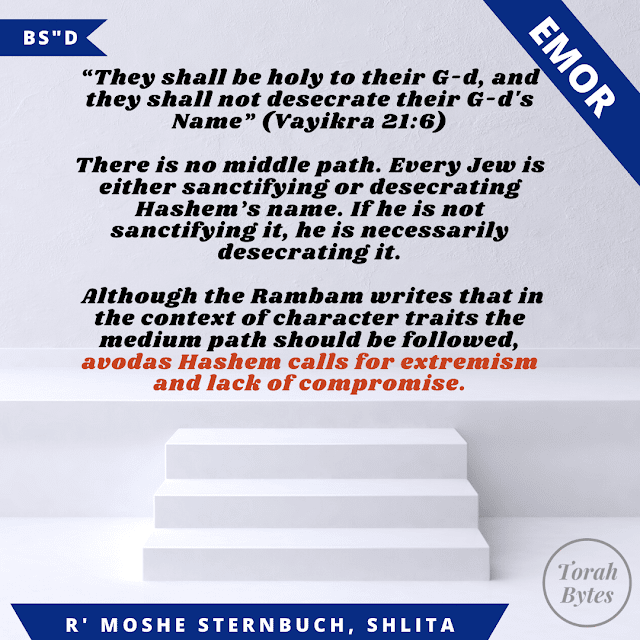 based on the droshos of HaRav Moshe Sternbuch, shlita

“They shall be holy to their G-d, and they shall not desecrate their G-d's Name” (Vayikra 21:6)

We would have thought that once a person has already become holy, it goes without saying that he will not desecrate Hashem’s name. Why is the order of the possuk not the reverse? Not only should you not profane the Name of Hashem, but you should reach a higher level and become holy to Him. This teaches us that that there is no middle path. Every Jew is either sanctifying or desecrating Hashem’s name. If he is not sanctifying it, he is necessarily desecrating it.

As the Vilna Gaon said, each Jew’s neshomo throughout his life is either on an ascent or a descent, and on Rosh Hashono Hashem examines the form of a person’s neshomo, which changes on a daily basis based on his actions. If Hashem sees that it has not changed for the better that necessarily means that a decline has set in.

Although the Rambam writes that in the context of character traits the medium path should be followed, avodas Hashem calls for extremism and lack of compromise.

One rav associated with the Mizrachi asked the Chazon Ish why on the one hand his policy was to attempt to draw the non-religious closer to the way of Torah, by contrast he fought so much against the national-religious Mizrachi party? After all, their followers kept the basics of yiddishkeit, so why quarrel with them?

The Chazon Ish answered as follows: “The non-religious know that they are not following the path of Torah, but their desires prevent them from accepting its yoke. There is therefore a chance to draw them closer to Torah by showing them how sweet it is. The Mizrachi, however, state that they are fundamentally opposed to extremism arguing that they favor the path of peace and so on, and they believe that the path they follow is the path of Torah, whereas in reality it is specifically extremism which prevents compromises. If we were to follow the method advocated by the Mizrachi, the secular population would rule over us and compel us all to give up our religious principles and practices. That is why we fight the Mizrachi. Although not every Jew is capable of being ‘extreme’, those who make a point of fighting against extremism, are responsible for wreaking havoc on klal yisroel.”
Avodas Hashem Extremisim Rabbi Moshe Sternbuch Rambam The Vilna Gaon