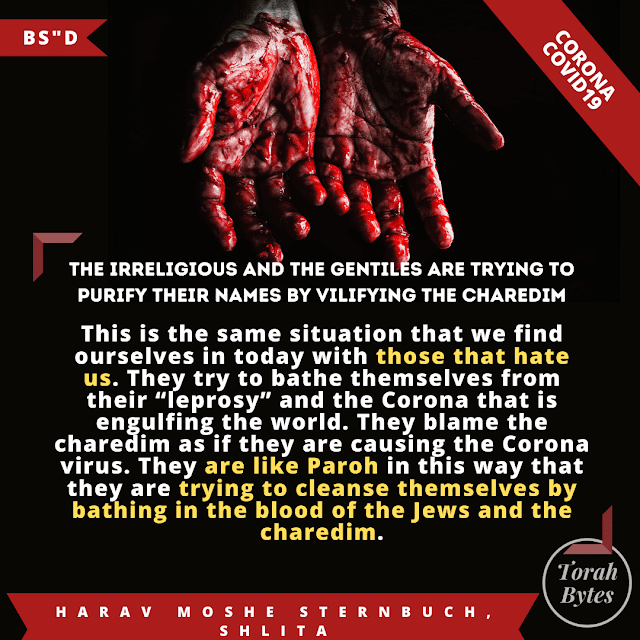 In Shemos 2:23 it says that Bnei Yisroel groaned from the workload in Egypt and cried out to Hashem. Chazal teach us that Paroh became a metzorah and he would slaughter Jewish babies and bathe in their blood. This is a strange phenomenon, why would someone bathe in the blood of a human being? Even the blood of an animal is disgusting. Why would an honorable king want to bath in human blood? This needs to be explained as a “remez” or hint. Paroh was trying to find an answer as to why he was stricken with leprosy. It is not something befitting a king like him to experience. For this reason, he started creating libels blaming the Jews. He claimed that sickness and infections increased due to the high birth rate experienced by the Jews. He therefore issued orders to kill them in order to reduce the spread of disease. Bathing in their blood is not literal. It means that he “cleaned himself” from this being a disgusting thing. He claimed that he was killing the Jewish children in order to stop the spread of disease.

This is the same situation that we find ourselves in today with those that hate us. They try to bathe themselves from their “leprosy” and the Corona that is engulfing the world. They blame the charedim as if they are causing the Corona virus. They are like Paroh in this way that they are trying to cleanse themselves by bathing in the blood of the Jews and the charedim.