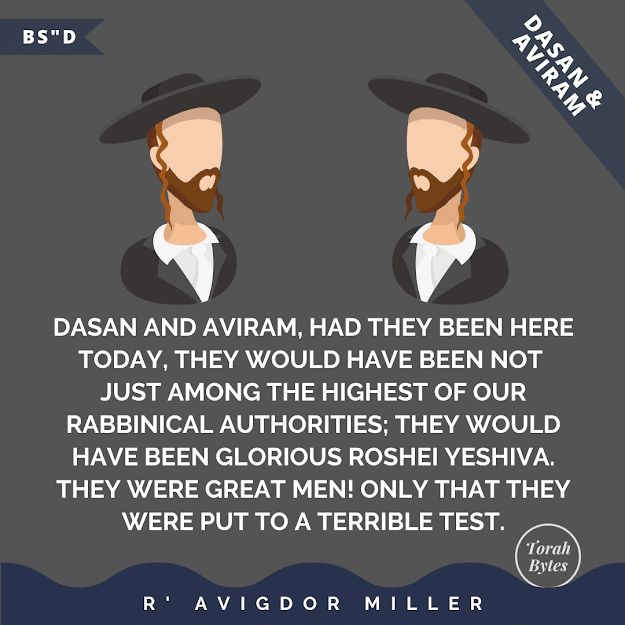 Q: How can we understand the characters of Dasan and Aviram who were, it seems, always at odds with Moshe Rabeinu?

A:
Now, you must understand that Dasan and Aviram stood at Har Sinai and they shouted "Naaseh v'nishmah" with all their heart like everybody else did – and don't think otherwise. Dasan and Aviram, had they been here today, they would have been not just among the highest of our Rabbinical authorities; they would have been glorious roshei yeshiva. They were great men! Only that they were put to a terrible test.

You know a great man can live in his own yeshiva and he can flourish; he can be very righteous because he is not being put to the test of being inferior to somebody else. Imagine, you build up a big yeshiva and you’re saying glorious shiurim. Everybody respects you and they’re all gaining from you; everyone is making progress because of you. And then a Jew moves into your neighborhood and he started davening at your yeshiva, and you discover that he can say better shiurimthan you can. Ooh wah! No Rav should be faced with such an ordeal. It would be wise to take him in a corner and say to him, "You know, you're so good, I think you should daven someplace else.”

But suppose you couldn't do that? Dasan and Aviram couldn't tell Moshe Rabbeinu to go. Moshe Rabbeinu was away forty years in Midian. During that time who do you think was the father of the nation? Dasan and Aviram and others were leading the nation – they were the ziknei Yisroel; they were the advisors of the people. All of a sudden an upstart comes back from nowhere, from Midian; he was lost for forty years and he’s coming now and giving orders. He's eighty years old but they're also old and he's telling them what to do. Of course he’s telling them b'sheim Hashem and they believed him. But it hurt them to no end. And had we been in their shoes I'm afraid of what would have happened to us. I'm afraid that we wouldn't have remained above ground. And therefore it was a terrible nisayon.

It happened to Shaul too. Shaul was the bechir Hashem, the chosen one of Hashem. And he was big anav too – he was a very big tzaddik. But he was put to a fiery test; an acid test. He discovered that there was a young man named Dovid who now suddenly was so great that he had captured the love and admiration of his people. Shaul had been the hero until now and suddenly there was a new hero of the people who was overshadowing him. It cut him to the quick. We have no idea how much it hurts!

Moshe Rabbeinu too. You remember when Moshe didn't want to die? So Hakodosh Boruch Hu said to him, “But Yehoshua has to take over; it's his time – your time is up.” So Moshe Rabbeinu said, "I’m willing to be a talmid. I'll be a disciple of Yehoshua.” So Hakodosh Boruch Hu said, “Aha! You think so. I'll give you a peek into the future.” And Moshe looked into the future and he saw that he was sitting with all the ziknei Yisroel in front of Yehoshua who was teaching them Torah. And Moshe couldn’t take it – he cried out from his vision and he said, “Hakodosh Boruch Hu; meah misos v’lo kinah achas – I'd rather die a hundred times than endure such an envy.” It's a rishpei aish; it’s a fire that consumes.