Free Will After Moshiach Comes 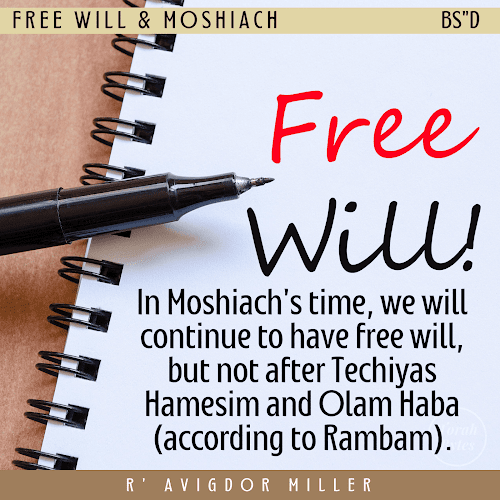 QUESTION: If there is no free will in Moshiach's time, why do we look forward to it?

ANSWER:
The truth is that there is free will in Moshiach's time, the Rambam paskans like Shmuel that, אין בין העולם הזה לימות המשיח אלא שיעבוד גליות בלבד, in Moshiach's time there is free will.
By techiyas hameisim there won't be free will anymore, in Olam Haba there's no free will, just happiness. In Moshiach's time there will be free will. Only we won't have the free will to be Jews in the spite of scorn; we won't be able to walk in the street anymore and hear somebody say, "dirty Jew", that's a privilege that only now you have. We're lucky today. If you walk in the street and you're insulted because you are a Jew, the Rambam says, תפארת גדולה היא לנו, it's a great glory for us, you hear that?
So hope it will happen, you're walking in the street and a black man is saying, "Jew, Jew!" Baruch Hashem you're so happy. I always tell the story of Reb Moshe Montefiore who was the mayor of London, and he was a millionaire. He once heard that the Jews in Russia were suffering from persecution, so he traveled to Russia to speak to the Czar, and to ask him to help the Jews in his country. As he was traveling through Warsaw, he was traveling in his own coach with footmen in uniforms like an English baron, so a Polish goy ran after the coach and said, "Zhid, Zhid", means Jew… So he stopped the coach, ran after him and caught the goy, who was shaking all over and brought him to the coach. So he took out a pound note, it was a lot of money in those days, and he gave it to him.
He said back in England they call me Lord Mayor, they call me Baron Montefiore, I have a lot of titles, but the biggest title of them all is what you called me just now, Zhid, Jew, that's the greatest title of all!
So Zhid means Yehuda, he praises Hashem, the greatest title of them all.
Good Shabbos To All,
R' Avigdor Miller
Rabbi Avigdor Miller