Importance of Parnassah for Non-Learners 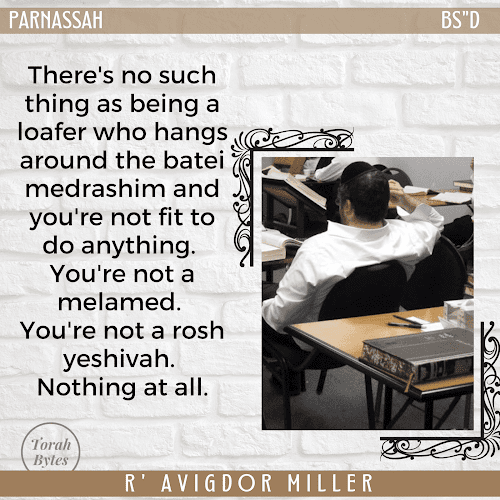 Q:
How should the yeshivos today prepare their students to earn a living in today's harsh economy?

A:
That's a very good question because many times there are boys who are not going to become outstanding in the field of teaching Torah; and therefore it's important for parents to think about the future of their children because the gemara says everybody must teach their son an umnus, a trade. Now, if I would talk about that in a plain way many people will criticize me because today it's the style not to think about that at all.

Of course, it's very useful for young people after they're married to continue a yeshiva career. If he can remain in yeshiva at least one year after marriage, it transforms his family into a kollel family; and even though later he goes into parnasa, it makes a big difference if he and his wife first lived a kollel life at least for a year. If they have enough money to continue longer, mah tov umah naim.

However, eventually, every person should look for a parnasa. Not toraso umnuso unless he is capable of being chosen, of being prepared, for some career in Torah. If he can be a melamed, why not? If he can be a rosh yeshivah, why not? If he can go into rabbanus, yes. There are fields like hashgachah. He can be a mashgiach, yes, or other related forms of parnasa in ruchniyus. But there are some people who are not built for that and therefore they must make up their minds when the time comes they must go into parnasa. You must support your family! There's no such thing as being a loafer who hangs around the batei medrashim and you're not fit to do anything. You're not a melamed. You're not a rosh yeshivah. Nothing at all. And many times these people first of all don't support their families and they cause trouble in shalom bayis, and many times they become ill chas v'shalom because of unhappiness, and therefore it's a misfortune to live a life where it's not mesudar with a regular program of parnasa.

There are plenty of things to do. This man is in the carpet-laying business. This man is a plumber. This man is a painter. Another man opens a grocery store. There is no end of parnasa. Take the yellow telephone book and read it and see all the different kinds of professions and trades available and learn some kind of parnasa. It's very important not to loaf and not to be a hopeless person and to waste your life in just being a disappointment to yourself and to your family.

Now, some people are capable of learning all their lives, being kollel people all their lives. However, on one condition. The condition is that their wives are satisfied with that kind of a life. Otherwise, he should remember he promised in the kesubah. He promised to support his wife kehilchos guvrin yehudain. He has to support his wife. Your wife will have children. You have to take care of the children. And therefore he has to support his family. And if he sits and learns in the kollel and his wife will be very unhappy then he's a failure and not fulfilling his promise.

If his wife is willing to work all her life or he has other means of support, why not? Many people learned all their lives successfully because they had wives who were dedicated to that. Otherwise, parnasa is a very big mitzvah, a big chiyuv, and I have seen cases where they neglected this principle and they lived lives of unhappiness as a result.

What kind of parnasa I can't tell you. How should the yeshivos prepare their students? I think that if boys in the high school will at least get a high school diploma, they'll know enough later in life to be able to do many things. In case you are a very good ben Torah and you wanted to learn instead of going to limudei chol – that happens too today. Some don't go to high school at all. That's because they have good heads. They're succeeding in learning. But suppose you're not such a metzuyan? I think it's better to finish high school in the yeshiva and be prepared to go out in the world and take some kind of a job. There are plenty of jobs available if a person makes up his mind he wants parnasa.