Rav Avigdor Miller on How To Become A Baal Teshuva 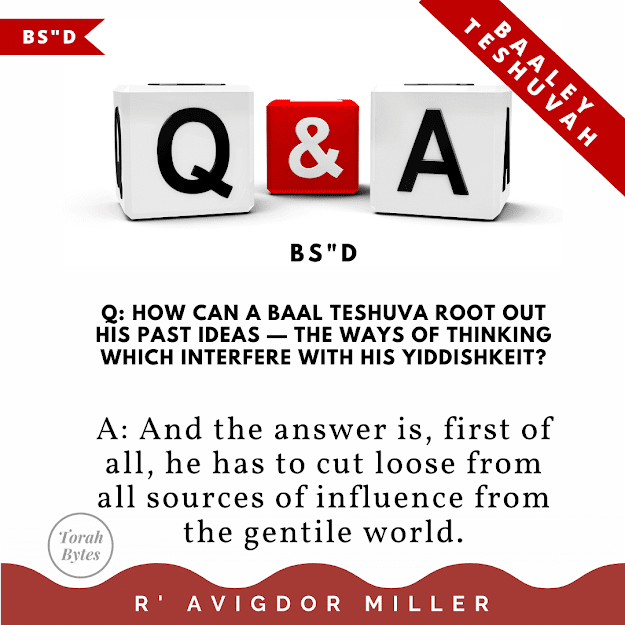 Rav Avigdor Miller on How To Become A Baal Teshuva

Q:How can a baal teshuva root out his past ideas — the ways of thinking which interfere with his Yiddishkeit?


A: And the answer is, first of all, he has to cut loose from all sources of influence from the gentile world.
I would have answered immediately, he has to learn daas Torah. He has to learn those seforim, those attitudes that give him a new set of values. You must learn! You have to learn seforim! Mesilas Yesharim, Shaarei Teshuva, Chovos Halvovos. There’s a lot of learn! If you’re not capable, then ask someone to tell you. But you must listen. You must go to places where you hear these ideas and get a new set of values.
That’s the best answer. But I didn’t say it because here’s the case of a man who took hold by accident of a bush of thorns. He’s holding onto the thorn bush and he’s crying out, “Ouch! Ouch!” he’s telling. “Bring the peroxide! Bring the listerine!”
So we say to him: “What are you crying about medicine?! First let go! Let go of the thorns!”
So here’s a man who’s a baal teshuva, but he sits and reads, let’s say, newspapers. So the newspapers are a constant source of replenishment of all of the false ideas that he claims to want to root out. He’s still grabbing onto the thorns! Whether it’s the Algemeiner Journal or the Jewish Press or whether it’s the New York Times. Each one on a different level, but הצד השוה שבהם שדרכם להזיק ושמירתם עליך - you’re not going to get better from them! All of these newspapers are not going to improve you!
So first you have to cut loose. You have to cut loose from magazines. Those girls, those women baalei teshuva have to know that as long as they continue to read the magazines, there’s no use talking! They can outwardly become better; they can put on a cloth over their hair and they can daven, but inwardly they're still receiving a supply from the sewer main that’s pouring sewage from the street into their minds!
Also, any Jew who means business with the Yiddishkeit, must know, there’s no two ways about it. You must get rid of that infernal machine. The television must get out of the house. There’s no use talking about it. You can dodge the subject, but you have to know that that’s the plain truth – you’re in direct contact with all that’s wicked in the world. Even smart goyim are saying today that that machine is corrupting the youth. It’s corrupting the minds of the adults too.
So therefore in reply to your questions, how can a baal teshuva get rid of all the wrong opinions? First thing is to stop getting the wrong opinions! That’s number one!
And then, go to places and study seforim. That’s the real program — you have to get busy acquiring a Torah mind. I can’t tell you on one foot, but if you’re interested I’ll be happy to help you.
TAPE # 165
#teshuvah #gentile_influence #qna #ravmiller
Rabbi Avigdor Miller Techiyas Hamesim Teshuva Teshuvah