It is forbidden to denigrate and disparage deceased individuals. There is a cherem kadmonim (a ban from the early authorities) upon this [1], indicating that it is a severe transgression.[2]
This applies even to a deceased am ha'aretz (ignoramus).  (However, it would seem that it would be permitted to speak about a rasha who did not repent before his deaht.) [3]  To degrade a Torah scholar after his passing is a much greater offense, and one is liable for the punishment of nidui (a form of ex-communication) for doing so.  Criticizing his Torah writings in a disrespectful manner is even worse than attacking the individual himself. [4]
[1] Even though the cherem is brought down as not being "motzi la'az and shem ra" on the dead -- which implies speaking falsehood -- most poskim hold that loshon hora is assur (forbidden) even without the cherem.  Some poskim hold that the cherem includes loshon hora as well as motzi shem ra (R' Chaim Kanievsky, Shu"t Az Nidberu, R' Y.S. Elyashiv, Aruch HaShulchan).  The cherem may not apply if the loshon hora consists of information that was already well-known about the person during his lifetime.  Rather, it refers to new negative speech being spread after his death which was not known about him previously (R' N. Karelitz). (Dirshu p. 466).
[2] Hilchos Loshon Hora VIII, 9
[3] Shu"t L'Chafetz B'Chaim.  This only applies to a mumar l'chachis -- one who sins intentionally and spitefully.  However, a mumar l'tei'avon, who sins simply to satisfy his desires, would be excluded from this heter (see Sec. 6:II) (L'rei'acha Kamocha). (Dirshu p. 466)
[4] LH VIII, 9.  Sometimes, in printed works of previous generations, one gadol severely criticizes another, but this generally occurs in areas of halacha, where he is vehemently opposed to the other's ruling and writes strongly against it in order that people not follow his words.  These instances are never an attempt to attack or malign the Torah scholar personally (LH VIII, 23).  Today, one must be extremely careful not to dismiss or disparage the Torah of earlier generations, even if one disagrees (Dirshu p. 467, see several stories there). 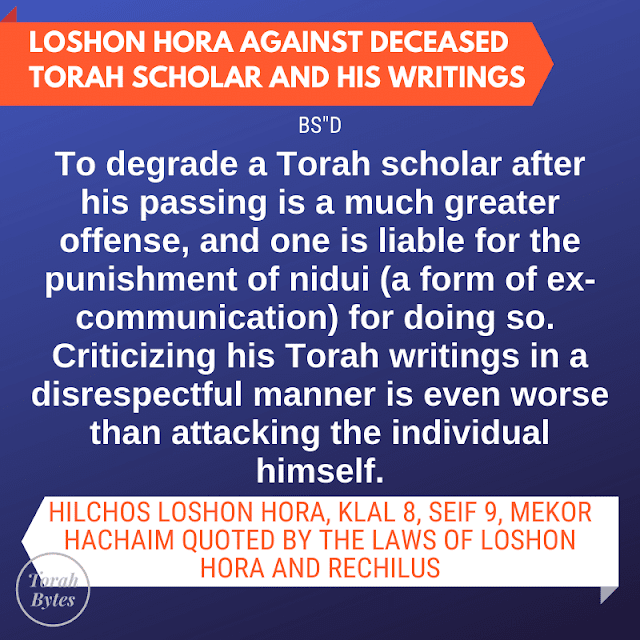