Rav Avigdor Miller on The Spread of Immorality Today 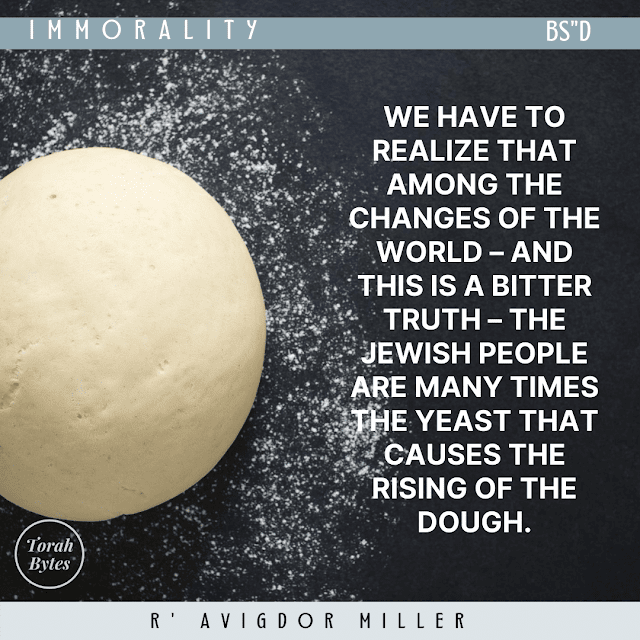 Rav Avigdor Miller on The Spread of Immorality Today

Q:
Why is it that today immoral behavior is more widespread than ever before?

Now, up until recently, the world benefited from our Torah. The nations had bible morals. Since the downfall of the Roman Empire most of mankind has lived by biblical principles. The bible says that homosexuality is an abomination and is punishable by death, so after the fall of the Roman Empire this became the norm. It doesn’t mean that the gentiles were perfect in this, however it certainly was repressed. We still remember how up until recently it was considered an abomination and a homosexual couldn’t hold any public office; he couldn’t even be a street cleaner and certainly not a fireman or a policeman.

However, we have to realize that among the changes of the world – and this is a bitter truth – the Jewish people are many times the yeast that causes the rising of the dough. When the Jewish people themselves are most loyal to the Torah, then there goes forth an emanation, an influence, and the nations of the world are also loyal to their concept of biblical ideology. More or less, they cling to certain principles, but it’s because the heart of the world, the Am Yisroel, is flaming with idealism.

But when the Jewish people over the last hundred years began defecting from the Torah and they began deteriorating, then all over the world there has set in a parallel deterioration. That’s when evolution raised its head in England almost a hundred and fifty years ago, and that’s when immorality began entering into literature. Up until not long ago most literature was careful to avoid any breath of immorality but that changed over the last hundred years. And after a while it began breaking out more and more.

And if you’ll look at the causes of today’s breakdown you’ll see that Jews are at the root of most of these things. Who was it that gave such a push to the surge of homosexuality in New York City if not Koch who came in and suddenly, against the wishes of the City Council, he issued an executive order giving gay rights in the area public employment. That was a thunderbolt! And I’m sorry to say that it was a number of Jewish councilmen, liberals, who backed him. It’s a pity that there were Irishmen who fought against this and Italians who fought against it; but the Jews? That’s a tragedy of tragedies. And that’s going to cause the galus, the exile, to continue longer and longer because of that.

Who is the mayor of that wicked city, San Fransisco? Diane Feinstein. Diane Feinstein, a Jewish woman! And who was that man who was killed in San Francisco? He was the ideal, the hero of the homosexuals in San Fransisco. A man named Milk. Harvey Milk; a Jew. A decent gentile got up and shot him because of his spreading homosexuality. The leaders, they’re not all Jews of course, but a great number of them are. Reform Rabbis too came out in favor of legitimizing homosexuality. It’s a great tragedy.

And so, when Jews forsake the Torah it has an effect on the nations of the world. It works in a mysterious but effective way nonetheless, and the gentiles also let down their principles and they began to become ruined. And therefore, today we see on all sides the results.

So there are two elements. One element is the free will of people; that’s when the nations themselves began to become more and more estranged from biblical ideology. And the other one is Hashem’s mysterious method of manipulating the affairs of the world in proportion or parallel to the conduct of the Jewish people.