When Gedolim are Taken Away from Us 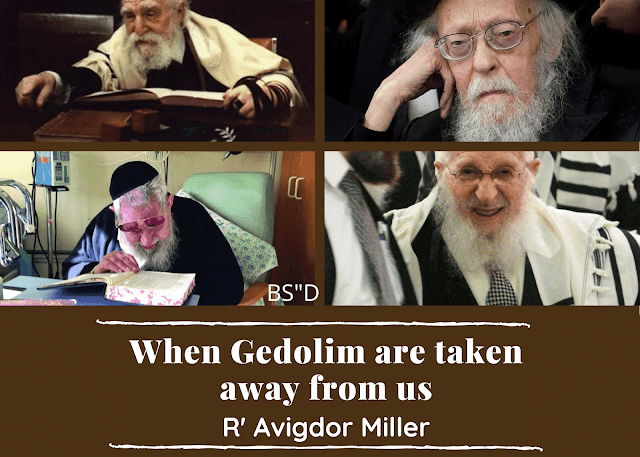 QUESTION: What's the chesed when Gedolim are taken away from us, after all any talmid chochom who passed away is like the Bais Hamikdash was burned down?
ANSWER: The gemara says, why did Shmuel Hanavi pass away at a certain time? Because he was taking up the place that somebody else was supposed to have. Now, that's a great principle in history, people are taken out of the world, because Hakadosh Baruch Hu wants to give somebody else a chance. Like the gemara says, (Megilah 28.) הבאים אחריך בהמה ירעו, should the ones who come after you be shepherds, or cattle herders? Give them a chance to become leaders too. We have to know that there is new energy in the young people that the old ones don't have.
Now lets say, here's an old talmid chochom, I have nobody in mind, so don't suspect me of any particular case. Here's an old Rabbi, an old Rosh Yeshiva, as long as he's here, he is the boss. But he's old now, he has old-time ideas too, and the whole situation of the institution is petrified. It continues, he's a great teacher, he's a great tzadik,he says wonderful shiurim, but finally he passes away and some young man takes over. This young man has new ideas, that you have to spread Torah by founding Yeshivos in other cities, that the old one didn't have, and now he gets busy doing that. That's the plan of Hakadosh Baruch Hu, you need new times, you need new leaders.
Therefore the old ones are taken away, first of all they can't live forever, but even if they happen to die an untimely death, a little earlier than they should have died it seems to us, it's for the reason that the person who follows in their footsteps, is going to do something that they couldn't do. That's the reason why old people have to get out of this world, Hakadosh Barucuh Hu says, you're an old fellow, you're not producing anything anymore, just sitting around, you're hardened in your ways, you're not learning any new things, you're not going out and conquering new worlds. What are you benefiting the world? Therefore you have to make way for somebody else.
That's why every person is able to be useful in his nineties, he can be a mechadesh in the nineties, he can be a pioneer in the nineties, so Hakadosh Baruch Hu says, I still need you. Of course you can't live past 120, but I'll try as close as I can. As long as you are useful we will try to keep you here.