The Chofetz Chaim on Earthquakes 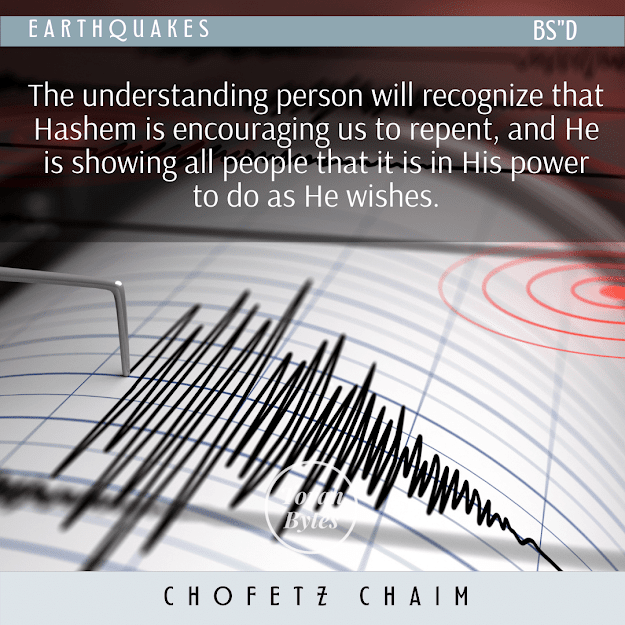 Why are you asleep?

The above title was given by R’ Yisrael Meir Hakohen z”l (the Chafetz Chaim; died 1933) to an open letter that he published on Erev Yom Kippur 5688 / 1927. The following are excerpts:

A few weeks ago, I published an essay regarding the earthquake that occurred in our Holy Land [on July 11, 1927, measuring 6.2 on the Richter scale and killing 130 people in Yerushalayim alone and hundreds more elsewhere]. In it, I encouraged the Jewish People to repent, for this earthquake was a warning to the entire world to turn back from its evil ways and to believe in Hashem, for everything occurs by His hand and it is not by coincidence that many frightening events have befallen us this year. Now we have received a new and terrifying report of awesome floods in our country [Poland] and of an earthquake in Russia in which thousands were killed or injured–men, women, and children, and many farm animals. How many of them were buried alive under their own homes? This earthquake was felt even in our own country. [Perhaps the Chafetz Chaim refers to the earthquake on September 11, 1927, which was centered on the Crimean peninsula and measured 9 on the Richter scale. That earthquake reportedly caused flames 500 feet high to shoot up from the waters of the Black Sea.] Certainly, fear and trembling should grip any thinking person. What has G-d done to us? Is He not good to all and merciful to all His creations? He does not even wish a wicked person to die, as it is written in Yechezkel (33:11), “As I live–says Hashem–I do not desire the death of the wicked one, but rather the wicked one’s return from his way, so that he may live.” The understanding person will recognize that Hashem is encouraging us to repent, and He is showing all people that it is in His power to do as He wishes. Who among all creations above or below can tell Him what to do?! It is clear to me that, if we had prophets, they would be standing up to encourage Yisrael to return to our Father in Heaven, but now that, for our sins, we do not have such messengers, He uses other messengers to encourage the people of the world, as it is written (Tehilim 104:4–Barchi Nafshi), “He makes the winds His messengers, the flaming fire His attendants.” . . .

Now, my brothers–We see that the Midat Ha’din / Attribute of Strict Justice has strengthened in the world and we have no day when we don’t hear terrible and terrifying reports. There is almost no country in the world which has escaped the Midat Ha’din this year. It is incumbent upon us to believe that this is a warning from Hashem that we must repent, for who knows what tomorrow will bring?! Any person whose heart has been touched by Yirat Hashem / Awe of G-d is like a ship’s captain, for he must clarify for the simpler folk the obligation to repent. [The Chafetz Chaim then lists areas requiring special attention: Shabbat observance, including taking responsibility for one’s children’s observance; putting on tefilin every day; proper immersion in a mikvah; maintaining “kosher” schools with “kosher” teachers; and, in particular, strengthening emunah / faith. He concludes:]

May He give us good counsel so that we will return to Him in true repentance, and may He bless us with a year of life and peace, a year of redemption and salvation for all of Yisrael. (Kol Kitvei He’Chafetz Chaim: Michtavim No. 12) #earthquake #chofetzchaim #teshuva
Chofetz Chaim Earthquake Teshuva